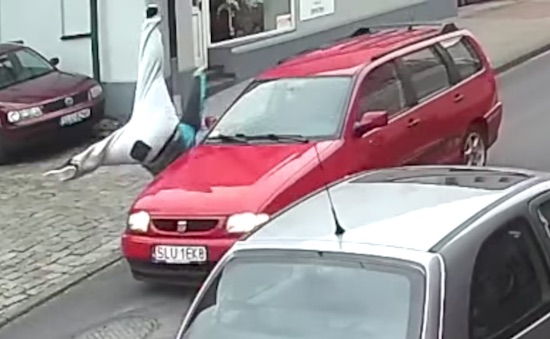 You’ve gotta love instant karma and this video provides yet another classic example of it.

We’re over in Poland where some chubby chav doesn’t like a shop for some reason and has decided to smash its front window. The guy did this once before a couple of weeks ago, but he decided to do it again last week too, only this time he was gonna get a bit of payback for his actions.

Not only did a guy come up and try and stop him – pretty halfhearted attempt to be honest, but I suppose you’ve gotta expect that when the guy is just trashing a shop in broad daylight – but whilst he’s making his ‘getaway’, he ends up getting completely flattened by a car. Good.

Gotta make sure we draw special attention to the guy’s trousers in this video as well because they’re clearly some of the worst I’ve ever seen. Just what is with that pattern, seriously?

Ouch. You can’t honestly say that guy didn’t deserve what happened to him because not only is he smashing up that shop all the time, he also ran out into the road without looking first which is an absolutely cardinal sin. Play with fire, you’re gonna get burned boy.

For more examples of instant karma, check out this compilation video. One of the most satisfying videos on the internet.