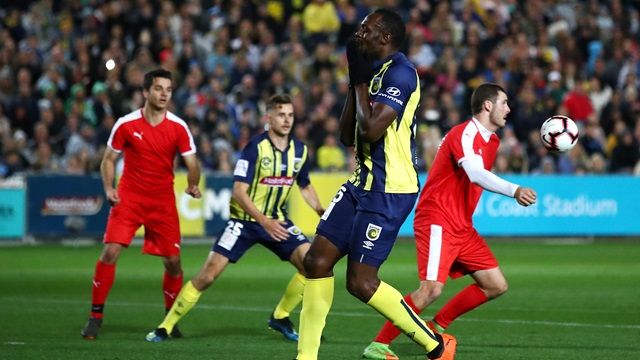 One of the dumber stories that has been floating around for a while is Olympic gold medallist Usain Bolt’s desperate attempts to try and become a professional footballer, which have currently led him to the Central Coast Mariners in the Australian A League.

Bolt is currently on trial with the outfit before the Australian season begins and made his debut as a 71st minute substitute today. He managed to touch the ball nine times, complete one pass and get dispossessed three times. He also managed to complete more stepovers than passes.

It doesn’t really sound like his debut went that great then hey, but when you look at these highlights – these are the only two clips I could find – it doesn’t actually look like it went that badly:

I mean he almost got to the ball in the second one for a tap in and I think the comment on the first one is a bit harsh as the ball actually went to one of his players and they got a shot off, even if it is a bit more luck than judgment there. I’m sure if Ronaldo had done that everyone would be bumming off it.

Anyway, here’s what Usain had to say about his debut:

I think the first 15 minutes was pretty good, but the last five I could feel my back getting a bit tight, but overall I wasn’t too tired, so that’s a good sign.

I think my fitness is much better from the first week to the second week. I need to keep pushing myself.’

Fair I guess. Apparently his coach is willing to give him a year to adapt which seems a bit stupid, but hey I would love it if he ended up doing really well at Central Coast Mariners. Be a real feel good story. Maybe he would even end up at Manchester United as well, who knows.

For more Usain Bolt, here he is daggering like a maniac at Trinidad carnival a while ago. Legend.