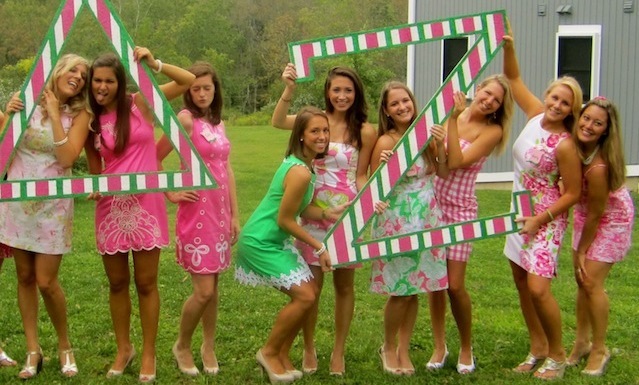 University of Connecticut officials have suspended the uniâ€™s Delta Zeta sorority as they investigate allegations that its members hazed the crap out of male students.

University of Connecticut officials have suspended the uni’s Delta Zeta sorority as they investigate allegations that its members plied men with alcohol then forced them to eat dog treats, paint each other’s bodies, wear women’s underwear and also drink shots off each other’s bodies.

The men involved — powerless to rebuff Delta Zeta’s super alpha females –  are being treated as victims of ‘hazing’.

So this is the kind of sick world we’re living in nowadays. A world where 5 foot blonde girls can force dudes to drink booze and put on women’s underwear and think they can get away with it. Have to say I kind of respect what these girls did — they completely turned the ‘uni lad’ game on its head and really fucked these boys up. Let’s not kid ourselves though, these guys were probably 100% up for whatever was happening to them which just makes it confusing how the girls got into trouble over this.

Did someone grass them up? If so, who? No chance any of the dudes involved complained about it, because it sounds like everyone had an awesome time.