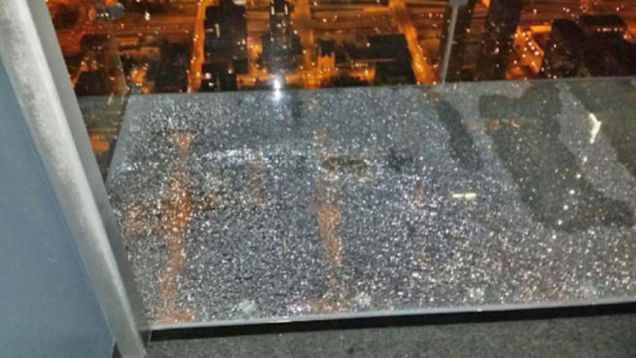 Well this is some people’s worst nightmares come true.

I don’t know if you’ve ever been up on one of those glass sky decks really high up in the air before, but I’ll tell you this if you haven’t – even though you’re in a building and it’s really really safe, they’re still fucking shit scary. And they would probably be even more scary if this happened to you whilst you were using one.

Over in Chicago, at the Willis Tower Skydeck – which is on the 103rd floor and about 1,353 feet – Alejandro Garibay and his family were preparing themselves to walk across one of the very same glass floors that we were just talking about it. As is often the case with these things it is actually shit scary to walk across them, so they were sharing a joke with the nearby members of staff who assured them that it was unbreakable and that they should just go right over it and not worry.

Alejandro and his family proceeded over it, only for the glass to start cracking. The same staff who had previously joked with them about it being unbreakable then told them to get off it ASAP and told them to leave when they started taking pictures of the broken glass with their camera phones. Naturally, Alejandro proceeded to go straight to the press with the pictures.

It seems like the whole thing was a false alarm though, and I can kind of believe the statement that the SkyDeck threw out there to try and explain it, because I’ve seen protective coverings break before on glass but the actual glass itself in between it has remained intact. Here’s what they said: ‘Occasionally this happens, but that’s because we designed it this way. Whatever happened last night is a result of the protective coating doing what it’s designed to.’

The SkyDeck was back open the day afterwards (Thursday morning) and it was all good, and I probably wouldn’t have a problem going across it if I was ever visiting. Except for the fact that I’d still be shit scared of it.