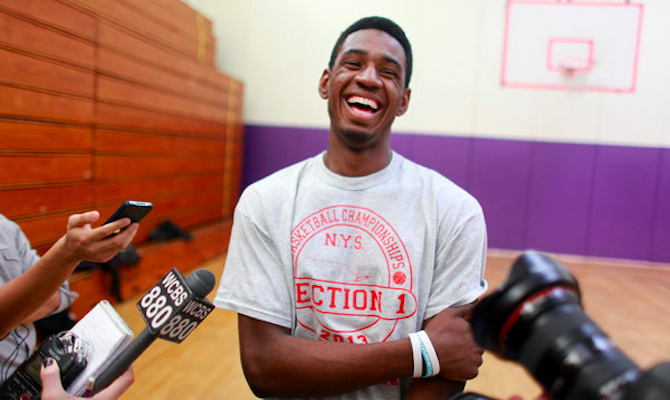 I think the title says everything that needs to be said about this video, but it’s one of the most unbelievable basketball plays I’ve ever seen.

Wow. I wouldn’t say I was the biggest basketball fan aside from playing NBA Jam when I was a kid and living with a guy who was nicknamed Nick Basketball when I was at university, but I can appreciate how awesome this last second play from some kid called Khalil Edney. This actually happened on Sunday/Monday so apologies if anyone has seen it already but I hadn’t seen that many people sharing it except for my buddy Juma Phist in the UK and I thought it was just too sick to not feature here on Sick Chirpse.

It happened over in some high school basketball tournament in New York City between two high schools called New Rochelle High and Mount Vernon High. Mount Vernon were winning the game by 2 points with just 2.9 seconds to go and it was New Rochelle’s possession. Obviously they needed to get the ball up the court as quickly as possible so someone could try and hit a three pointer or just dunk it to draw the game and force an extra period

New Rochelle put this guy Khalil Edney on throwing the ball from their end as far down the other end as he could because he was also the high school’s star quarterback – go figure – but unfortunately he screwed this up completely and some guy from Mount Vernon called Jalen David intercepted the ball. With their only being a second or so left on the clock, David figured if he threw the ball up in the air it would let the timer run out and there would be no chance for anyone on New Rochelle to foul him and stop the clock, meaning they MIGHT get another shot off. I’m led to believe that this was a pretty solid tactic under the circumstances.

David didn’t reckon with Khalil Edney though, who was eager to make up for his crappy pass and bombed up the field, grabbed the loose ball in mid air and threw a 55 foot three pointer to win it with 0.1 seconds on the clock. Pretty unbelievable stuff right? The crowd goes absolutely wild which is completely awesome, and I also love the way the commentator is like ‘and Mount Vernon are gonna hold on and win…HOLD ON ONE SECOND!!!’ It’s a great scene.

There’s some debate over whether he got the shot off in time but the commentators look back over the video and seem to think that he did. And anyway, after a shot like that you probably have to give it to the guy, even if he is 0.1 seconds off the pace or whatever. To make the story even better, Khalil Edney dedicated what has now been termed ‘The Shot’ (original) to his mother who died of cancer when he was 10. He has Momma’s Boy tattooed on his arms along with her date of birth and death. What a guy.

Despite all this hullabaloo about The Shot, Edney is going to Dean College in Massachusetts next year to play american football and not basketball. Probably a good move as it seems unlikely that he will ever do anything as good as The Shot in basketball (and probably football) too in the future.

Check out a video of the unbelievable play below: