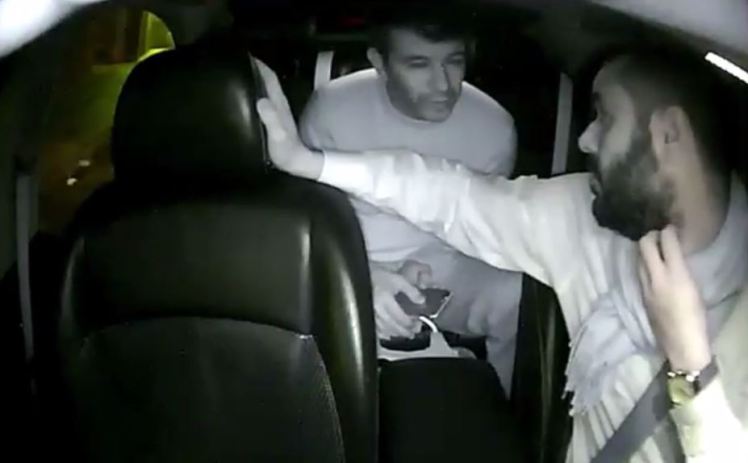 Bet he got one star.

Uber burst onto the scene a few years ago and the company has generally been embraced as a cheaper, more efficient and better way of organising a taxi. However, there are some questions over the ethics of the company and how they exploit drivers and other taxi businesses. This video is hardly going to do anything to help that image.

The video features Uber CEO Travis Kalanick on a ride in the high class Uber Black service driven by Fawzi Kamel. Much of the video features Kalanick and two girls awkwardly dancing to Maroon 5 and then having a really dumb conversation about star signs, but towards the end Kamel kicks off at him about fucking up Uber and his life pretty much, and his response leaves a lot to be desired.

You can watch the full video below (the action is near the end) or check out a transcript of the key points below:

Kamel: You’re raising the standards, and you’re dropping the prices.

Some people don’t like to take responsibility for their own shit.

They blame everything in their life on somebody else. Good luck.

Ouch. Kinda seems like Kalanick was drunk, but either way he probably shouldn’t have engaged with the driver or at least not acted like such an asshole. Unluckily for him, the incident was filmed and is now doing the rounds and he’s had to issue the following grovelling apology:

To say that I am ashamed is an extreme understatement.

My job as your leader is to lead… and that starts with behaving in a way that makes us all proud. That is not what I did, and it cannot be explained away.

It’s clear this video is a reflection of me – and the criticism we’ve received is a stark reminder that I must fundamentally change as a leader and grow up.

This is the first time I’ve been willing to admit that I need leadership help and I intend to get it.

Well, Kalanick talks a good game, but do you really think anything is going to change with Uber? It seems unlikely considering how many stories we hear about them almost every other day now. Even so, I doubt any of us are going to delete the app because it’s just so easy to use. If you have done, you’re a better person than me.

For more Uber horror stories, check out this one about how they set up a surcharge when they know you’ve got low battery. Can’t possibly be true can it?