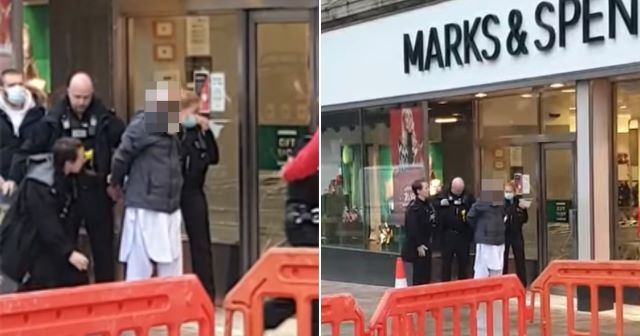 Two women have been stabbed at a Marks & Spencer store in Burnley just hours after the lockdown ended and shops in England reopened.

A 57-year-old man has been arrested following the incident and both victims are currently being treated for serious injuries, though thankfully not life-threatening.

We are currently dealing with an incident at Marks & Spencer in Burnley where two people have received stab injuries.

Their injuries are described as serious but not life-threatening.

One man has been arrested and is in custody at this stage.

Nobody else is thought to be involved.

Police were called to the store, on St James Street, at 9.25am this morning. As you can see from the footage above, officers and security guards held the suspect as he was placed in handcuffs outside the shop. A witness can be heard saying: ‘What the f**k. Armed response are here for sure.’

What a way to reintroduce ourselves back into the real world after lockdown #2 eh? All that’s left is to figure out what this lunatic’s motive was? Mental illness? Early morning queues? Maybe he preferred life in lockdown and was trying to get everything shut down again?

In any case, let’s wish the two victims a speedy recovery and be thankful the suspect was apprehended before things could get away worse. Happy Christmas shopping, everybody!

For the woman who gave birth outside Primark in Birmingham, click HERE. Classic.