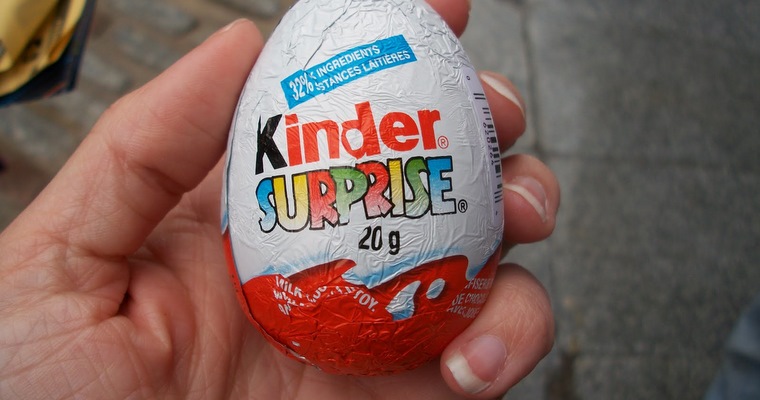 A Brazilian father trolls his son with an unexpected treat – a raw egg disguised as a Kinder Surprise.

My dad played some cruel tricks on us when we were younger. The time we came home from school to find him “dead” on the floor, his eyes glazed over and ketchup smeared across his throat and dripping down his shirt. The time he hauled the entire family to the airport at 5am, only to inform us he wasn’t even going anywhere. Or the numerous times he would come to pick us up from our friends’ houses, only to keep driving 5 metres up the road each time we tried to get in the car, till eventually we’d gone round the block, angry, exhausted and confused. Still, at least he never filmed his pranks and uploaded them onto YouTube for the world to see, right?

No such reprieve from this Brazilian dad, who wraps a raw egg inside a Kinder Surprise wrapper and offers the deceptive treat to his young son. After some apprehension from the poor kid, and plenty of egging on (pun intended) from his dad, the lad decides that if you can’t trust the man who brought you into this world and raised you up to this point, then who can you trust? He bites down on the egg and almost immediately bursts into tears while his dad roars in laughter, capturing the whole thing on camera and sending it viral.

â˜› Watch Next: Kids Pull Halloween Prank On The Wrong Grandad And Almost Get Stabbed

When it comes to my own dad and the pranks he played on us, all my siblings and I have are the memories. Thanks to the Internet, this little fella will be able to relive the moment his dad fucked him up for life over and over again. I also reckon he’ll be pretty suspicious of any Kinder Surprises in the future.

â˜› Check This Out Next: Plane Travelling At 200MPH Misses Pranksters On Runway By 2 Feet