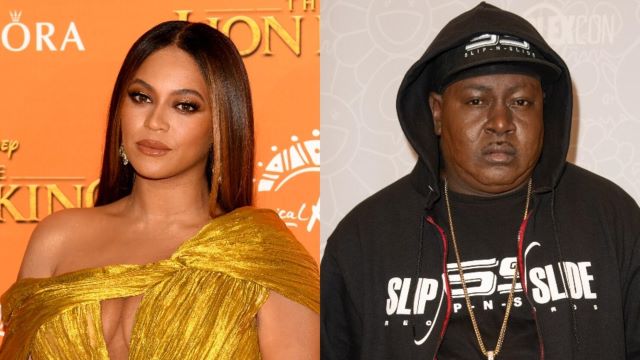 Beyoncé’s fans can be so mean.

Remember the rapper Trick Daddy? Don’t blame you if you don’t as he only had a few rather obscure hits back in the late 90s/early 00s, but he’s been out of the rap game for a while now running a restaurant and talking shit about more successful artists in his spare time.

During an interview on Clubhouse this week, Trick Daddy made the fatal error of going after Beyoncé…

Beyoncé ain’t trying to give back to music or nothing.

Man, I watched my godmama train Beyoncé, vocal lessons all her career.

So yeah he’s entitled to his opinion but it’s pretty insane to say Beyoncé can’t sing considering she has one of the most elite voices on the planet. Trick Daddy then decided to dig an even deeper hole by going after Beyoncé’s husband Jay-Z…

I’mma give an unpopular opinion right now: Beyoncé is to R&B what Jay Z is to New York. That’s why they together. Jay Z ain’t never won the greatest rapper alive. Whoever put him on a level like that?

You already know that Beyoncé is too massive to acknowledge what a lowly peasant like Trick Daddy says about her, but her fanbase, the ‘BeyHive’, took care of that for her…

Trick Daddy said Beyoncé can’t sing, meanwhile he looks like this. I know an embalmed body when I see one. Now I’m about to ruin his day like that hairline is ruined. Florida Evans son. You got a crater face and a half a mustache. How dare you?! pic.twitter.com/d8lNbvOnTh

Trick daddy. You already out here looking like the melted brownie inside of a kid cuisine dinner.

Trick Daddy outta breath outta shape ass forgot he was up there on #VERZUZ the other night struggling to survive🤬🤬🤬 Got the dog ass nerve to say Beyonce can’t sing. Scuse me bitch. Beyonce don’t lose breath after 2 minutes on stage. Boy bye FOH pic.twitter.com/iPArnjx24Y

Trick Daddy please tend to the potholes on your face and keep Beyoncé name out yah mouth. pic.twitter.com/WYa13SbFc3

They didn’t stop there either – the BeyHive then got to work on Trick Daddy’s restaurant reviews and dropped it from a 4.7 to a 3.1, while also flooding his Instagram with bee emojis. Harsh!

After wrongfully shading Beyoncé and her husband, the Beyhive got to work. Trick daddy’s restaurant’s rating went from a 4.7 to a 3.1 & his whole Instagram is flooded with bee emojis. When we use our power >> pic.twitter.com/bBmx83CPjN

Bloody hell – this lot don’t mess about do they? Moral of the story = do not mess with Beyoncé and her fanbase unless you are a completely anonymous person with nothing to lose. Unlucky, Trick Daddy.

To meet the crackhead who took a stolen car on a joyride and then tried to convince cops who pulled her over that she was Beyoncé Knowles, click HERE. Pretty convincing to be fair.