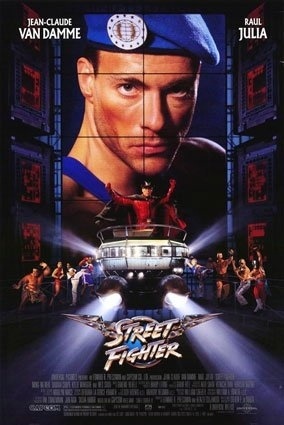 It’s been just over a week since the worst snowstorm in history (re: a while) hit New York City and the trash still hasn’t been collected, with some of it apparently now being piled over 6 feet high – No one likes to take walks through dirty and trash-ridden neighborhoods. When you decide to hire dumpster rental Montgomery county pa, you will notice that there are more suitable places where you can get rid of your trash, instead of having to walk blocks to find a trash bin. It will help you organize your garbage better before you take it outside, and it can help keep the planet cleaner.- Garbagemen have been unable to pick it up, in part due to the weather and in part due to the vast amount of cars that were left abandoned on the street as a result of it. 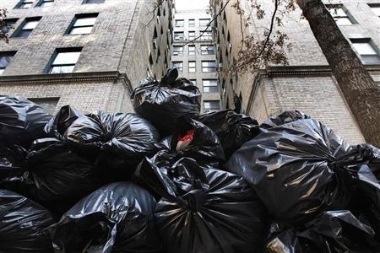 However, one woman is thankful that the trash hasn’t been collected, as it saved the life of her mentally disabled nephew, Vangelis Kapatos, who tried to commit suicide by jumping from a 100ft window on his building after he was threatened with eviction. A police spokesman has confirmed the only reason he is still alive is because he landed on a 6 foot high pile of trash bags. Katherine Capatos, who for some reason spells her name differently to her nephew, is quoted as saying: ‘Everybody is complaining that the trash hasn’t been picked up. But me, I’m thankful that it was never picked up. Maybe it was lucky we had this snow and they hadn’t cleared the garbage.’ 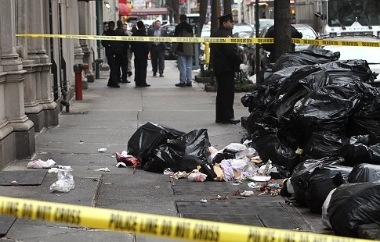 Well, that’s a real swell opinion Katherine, but I doubt the rest of New York City is so stoked about living in a stinky cesspit for the past week and a half, and being subject to attack by rats and raccoons (!!) as a result of this. Or even Vangelis himself -who has tried to slit his throat and hang himself on previous occasions and is described as a manic depressive – and as such is probably not too stoked to find himself still alive and stuck in hospital with a bunch of injuries. He probably stinks of trash now too.