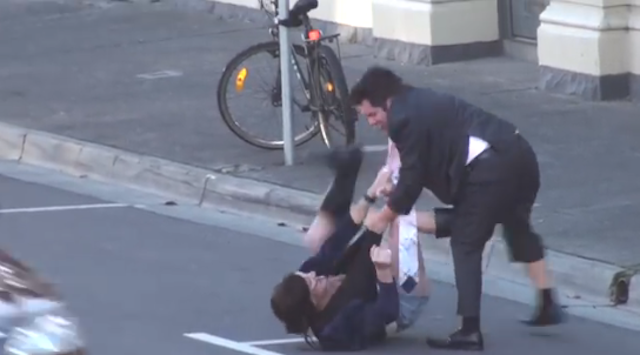 This is pretty awesome and really shows that dickheads who try to rip off prostitutes (be they transgendered or not) aren’t always going to get away with it.

I’m not really sure what the prostitution or transgender scene is really like over in Melbourne, but it seems like it definitely exists as you can see from this video. Some fat dickhead has just had a night of passion with one of the transgender hookers from the area and is refusing to pay, but he gets way more than he bargained for as the woman relentlessly stalks and beats him – ripping off his clothes, pulling him out of a taxi and putting him in a headlock – until he agrees to go to a cashpoint and get her some money out.

When it’s revealed that he doesn’t actually have any money she steals his phone instead. Girl power or what? The best part of the video though is probably where a taxi driver pulls over to help out in the fight because he thinks that it’s a woman getting beat up by a man, but the driver takes one look at what’s going on and just let’s them go at it. Raw.

This was also happening at 8:30 in the morning. What a way to start your day.