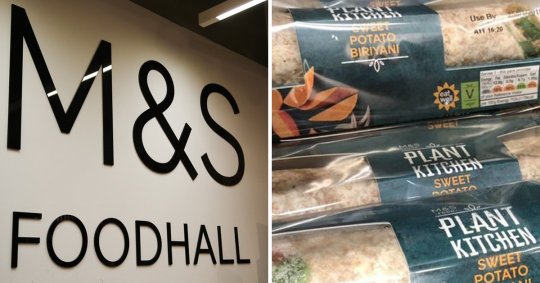 Normally when it comes to vegan dishes people are just annoyed with them due to their very nature, but now a top chef is attacking a new offering from M & S and accusing it of cultural appropriation.

The complaint comes courtesy of Maunika Gowardhan – a top chef and author – who has a problem with the retailer’s new vegan Biryani wrap. She’s claiming that Marks & Spencer are taking advantage of Indian food to increase profits without offering an authentic Indian experience:

Thanks but I like my Biryani with rice in a bowl not a wrap. Seriously M&S!?

In India firstly there is no such thing as a veg Biryani.

Most places will serve mutton or chicken or even fish.

It’s wrong on many levels when people will assume this is what a Biryani looks like!

Biryani – how is this a biryani? How have @marksandspencer managed not only to mess up the spelling, but make a biryani without rice and meat? IT NEEDS MEAT! Just because you put a sauce in it that maybe tastes like a ‘generic curry’, doesn’t mean you can call it what you like! https://t.co/D9RdmYw7Dn

I mean I don’t know much about Biyani but it seems like Gowardhan wasn’t the only one who was getting really upset about what M & S were offering as a couple of people were also blowing up on Twitter about it as well. They sound like they know what they’re talking about as well so I’m gonna bow to their superior knowledge on this one.

Of course, M& S failed to realise the seriousness of the situation and instead released a statement acknowledging there were some complaints about it and just saying that they had used a variety of flavours and ingredients to create tasty new products or something. They should really have just put meat in the Biryani though. Jerks – normally I don’t get pissed of at vegan options but this really is stupid. Just don’t call it a Biryani you idiots and understand how it