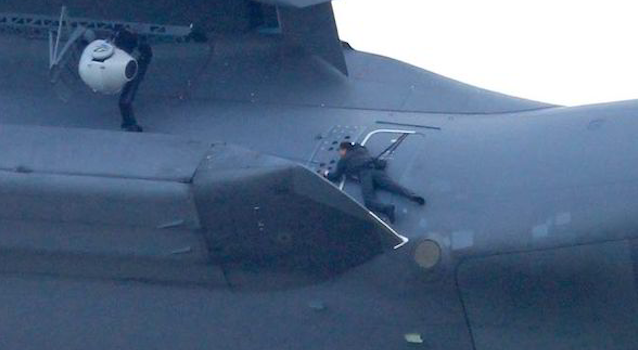 This time he’s holding onto a plane whilst it takes off and flies to 5000 foot in the air.

Tom Cruise has long had a reputation for performing his own stunts and they seem to have gotten crazier and crazier as his movie career has progressed, in particular with the Mission Impossible series – can you remember when he was on top of the Burj Khalifa in the last one?

Despite the fact that he’s 52 now, this hasn’t let Tom slow down and he’s still determined to do even more dangerous stunts in the latest Mission Impossible movie. Yes, there’s another Mission Impossible movie coming out soon which will be the 5th one in about 20 years I think – did anyone really think it had such a franchise in it when that first one came out?

In any case it has and the stunts are probably a big part of that. No idea why he has to do this in the movie – probably because someone is getting away and there’s just no other way to catch them – but Tom has to cling onto the side of an airplane as it took off and rose to 5000 feet. I assume he breaks into it somehow at some point but that unfortunately can’t be seen in any of the clips that have been released at this point. It looks like he’s just wearing a suit as well which is pretty fucking crazy, right?

Can’t wait how they explain that one when the movie drops which will inevitably be next summer. At least it didn’t go really badly wrong though hey?