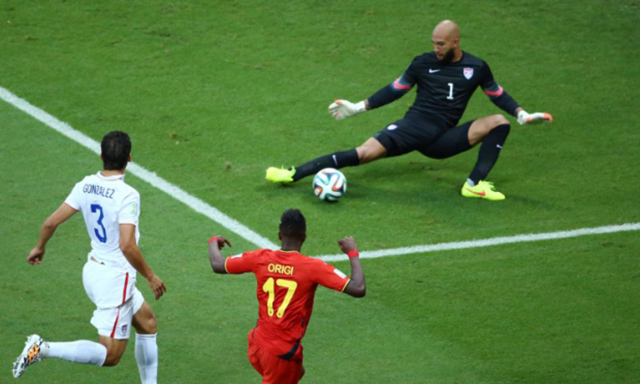 Despite the USA crashing out against Belgium last night, their keeper Tim Howard put on an extraordinary showing in goal and basically kept his team in it until extra time.

He made 15 saves — the most ever recorded by a single keeper in a World Cup game since records began in 1966.

This morning, two online government petitons have been started by American footie fans who want to 1) rename Ronald Regan Washington National Airport to Tim Howard National Airport and 2) make him the US Secretary of Defence.

Whereas Tim Howard has shown himself to be a national treasure, Minister of Defense, friend of Joe Biden, and the holder for the record of most saves in a World Cup match; therefore, we politely request that we rename the airport to recognise his accomplishments, and meritorious service to the United States of America.

We, the undersigned, hereby petition for the appointment of Timothy Matthew “Tim” Howard, Goalkeeper and MVP of the USMNT, king of the Andals, the Rhoynar and the First Men, to the office of U.S. Secretary of Defence for acts of valor and general badassery during the 2014 World Cup.

If either petition picks up 100,000 signatures by 31 July, the White House will have no choice but to review them. We reckon they’ll have heard about this already though.

Click over for the best Tim Howard memes currently doing the rounds: