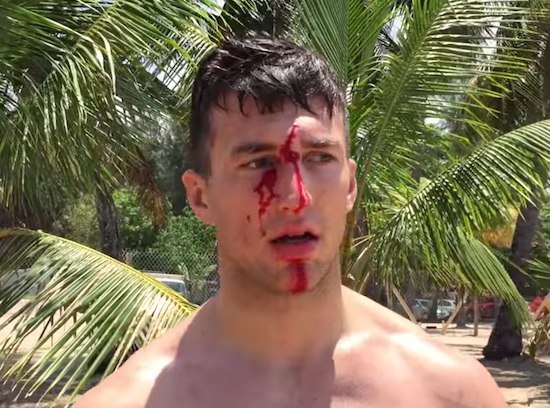 Clearly he’s been absolutely shredded but he doesn’t act like it here.

I’m not a surfer and one of the reasons for that is that I’m probably too scared that I would fall off my board and get eaten by a shark or shredded on some rocks like the guy in this clip. The thing that makes this video remarkable though is that despite his body and face being completely cut up that the guy doesn’t seem to give one single solitary fuck.

The video is taken at the notorious Blow Hole on Jobos Beach in Puerto Rica and features a guy visiting as a tourist from New Jersey. He got smashed on the rocks and was in such a state of shock that he literally had no idea how bad the damage to his entire body was and decided to just stand around on the beach chatting to people like nothing had even happened.

Then he actually takes a look at some of his injuries and his whole tone begins to change. Fortunately the locals had seen this kind of behaviour before and knew exactly how to deal with it:

Yeah, I can’t believe how casual he is about that. I bet he wasn’t like that for the entire 45 minutes he was waiting for the ambulance to come – definitely shrieking and screaming in agony by the end of it.He’s lucky these guys knew what they were doing and were able to sort him out because those were some nasty cuts that probably needed more than the few stitches he originally thought.

For more surfing accidents, check out this guy getting his leg snapped in two by the biggest wave swell ever. Wipe out.