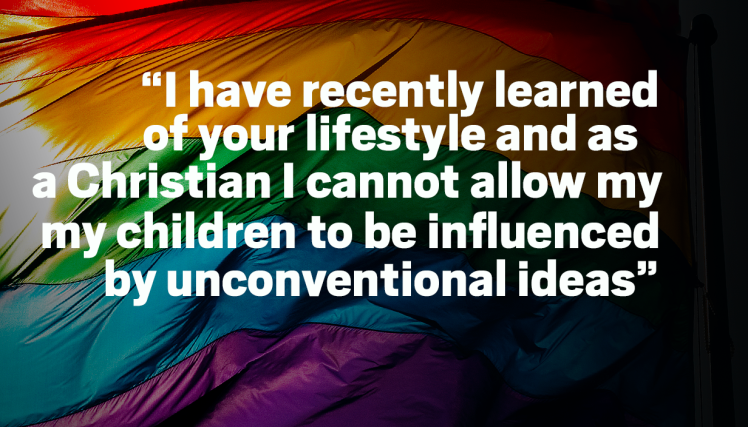 Someone call the ambulance, this bitch just got burnt.

If there’s anything that the event’s of the past week have shown us, it’s that religion incites some pretty disgusting and horrendous actions in some of the more dedicated believers out there. A lot of people are quick to blame people of the Islamic faith and forget that other religions can be just as hateful. This story is a prime example of that.

Michael Neri – a 26 year old drama teacher from Kidderminster – was understandably pretty pissed when he received a text from the mother of two of his pupils informing him that she would be withdrawing her children from his class after finding out the teacher was gay. She wrote:

I have recently learned of your lifestyle and as a Christian I cannot allow my children to be influenced by unconventional ideas.

It is our believe that a man should marry a woman.

Almost unbelievable that in the 21st century people still feel that way, right? Not only that, but she also asked that Michael refund the deposit that she had paid. Hardly a very christian attitude.

It’s funny that some of us are happy to blame muslims for the extreme acts of people who don’t really believe the same things as they do or even reflect their own beliefs; people who often contradict their own religion when carrying out those extreme acts, yet when a christian does the same, very few people will blame christianity as a whole. Sounds like double-standards to me, but that’s a whole other can of worms.

Michael, ironically behaving in a much more christian way then the mother, was cool, calm and collected in his response. He even went as far as to serve an absolute par to this two-faced believer at the end of his reply. Read the full conversation for yourself: 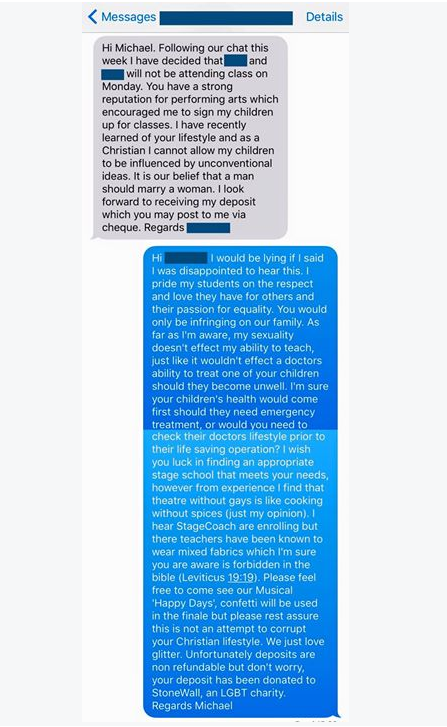 I particularly enjoyed his highlighting of a bible passage and the donation of her deposit to an LGBT charity, what an absolute badman. Sadly, the mum never replied. I’m not surprised though, she’s probably too busy nursing those 3rd degree burns.

Ever the humble gentlemen, Michael explained after the messages went viral that he understands everyone is entitled to their opinion, and that he was merely hurt by her words:

When I first saw the message I had to read it through twice.

I believe that everyone is entitled to their own opinion, but it was still a hurtful thing to receive.

I didn’t want to upset anyone, but I needed to protect myself and my organisation, so I thought I would reply in a polite manner.

If the mother changes her mind then her children are more than welcome to attend classes here — I certainly don’t blame them for the way their mother thinks.

Fair play. Although, if it was me I probably would have just told her to eat a bag of dicks.

Unfortunately, the world seems to be full of these bigots.