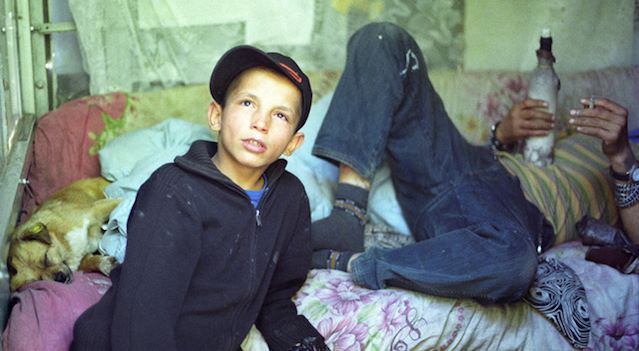 In the Romanian capital of Bucharest, there are a bunch of orphaned kids who live in tunnels underneath the city, known as The Lost Boys. This photo collection captures their story.

In 2011, photographer Joost Vandebrug met a kid called Costel on the street of Bucharest and took a few pictures of him. A couple of days later, Costel invited him to meet his network of Lost Boys – a whole bunch of third generation orphaned homeless kids that live in the tunnels underneath the Romanian capital since the fall of communism two decades ago. Over the past couple of years, he has photographed the boys in their natural environment and developed a powerful and emotive photo collection of them.

These include pictures of the leader of the Lost Boys, a heavily tattooed adult called Bruce Lee. I’m not really sure what his deal is but if you take a look at some of these pictures then you’ll see that he’s a weird looking guy who seems to dress completely in silver – including his hair – and definitely has more than one story behind him. The four boys that make up the majority of the photographs alongside Costel are Nicu (13), Stefan (10) and Liviu (14). There are also a bunch of dogs as everyone knows a homeless person’s best friend is his dog.

Vandebrug hung out in the tunnels for weeks on end, photographing their encounters with the law, drug addicts, orphanages and other rival gangs of boys, all the while being amazed by the intense sense of friendship between them all, which he mainly puts down to Bruce Lee’s role as a father figure.

Recently, Nicu was diagnosed with AIDS so Vandebrug decided that to try and help him out with his medical bills and just his life in general he would compile all the photographs he had taken over the past couple of years into a book, that would be sold with the vast majority of the profits going towards helping the Lost Boys. Of course he’s using Kickstarter to fund this project so if you want to get involved do so here – it looks as though he’s going to make his target anyway though.

If not just enjoy these pictures and short movie from it: