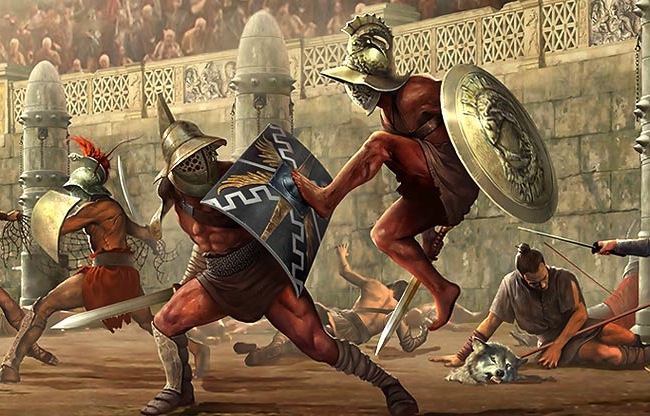 It’s fair to say that a large sub-section is indebted to the vicious arena combat of ancient times, such as the gladiators of ancient Rome. The most obvious example would be the fighting game genre, whose intense one-versus-one combat is a direct descendant of ancient fighting tournaments.

But which would be the most evocative of those times gone by? Perhaps Mortal Kombat, whose trademark ‘fatalities’ are often brutal enough that they might have made even the most hardened gladiator wince. Or maybe Tekken — you’d certainly have to train with the focus and determination of a gladiator to master that game’s labyrinthine combo system. You could even argue that a weapon-based fighter like Soul Calibur is the best reflection of that ancient style of combat, as battles in the Colosseum were rarely just bare-knuckle brawls. There’s even a little Roman spirit in Super Smash Bros. — both the no-holds barred action and the cheers and gasps of the crowd might bring to mind a chaotic fight in the arena.

Indeed, this influence on gaming will come full circle in the upcoming free-to-play game Spartacus Legends. Inspired by the recent Spartacus TV show, it’ll allow you to arm and train your own roster of gladiators, then have them face off in one-on-one battles against other warriors in arenas ranging from the training grounds to the Colosseum itself. The game will even capture the bloodthirsty nature of the sport, and if the crowd demand it then your head will be on the line if you lose. But it’s not just fighting games that directly reference the Gladiators of old. If you visit visit www.gladiator-slot.com, you can play the exciting Gladiator slot game — and unlike the ancient combatants, you won’t have to gamble with your life to experience the thrill of gladiatorial combat.

It’s not just humans who partake in these fierce battles — the PokÃ©mon series owes a lot to the gladiators too, though thankfully the battles aren’t lethal in this case, in order to keep things kid-friendly. There’s the core concept of trainers pitting their PokÃ©mon against those of rival trainers, as well as the spectacle of grand battle arenas in games like PokÃ©mon Stadium. In fact, there was even a game called PokÃ©mon Colosseum which was released for the Gamecube, which featured tournament battles as a major part of its story.

There are also role-playing games that feature arenas as part of their world. The Elder Scrolls IV: Oblivion features a side-quest focused around the arena in the Imperial City, allowing you to work your way up to the status of Grand Champion and fight man and beast alike. The tactical RPG series Fire Emblem also lets you battle in arenas for money and experience — but like the real gladiators, there’s the risk of your character dying if they end up losing a battle. Fortunately, you can resign from the battle early if things are looking grim — the ancient Romans would see that as a loss of honour, however! Perhaps we should be thankful for the option to surrender in these video games — for the real life gladiators, the only choice was between glory and death.