I’ve got to admit, ayahuasca is a drug that was not in my substance vocabulary until relatively recently and is one that I probably could have used in the midst of my drug-taking days.

For those of you who don’t know what ayahuasca is, it’s an Amazonian plant mixture that causes the taker to enter different states of consciousness, usually lasting between 4-8 hours after ingestion. This hallucinogenic substance has been used for decades as a medicine and a shamanic means of communication particularly in many countries in South America.

However, ayahuasca taking ceremonies and the interest surrounding the drug has been gaining interest in the West due to its healing properties. It’s particularly popular in yoga and meditation circles as it allows people to reach another state of consciousness, confront themselves with the riches of the mind and the universe and also, if taken with the right spirit guide, will allow you to go back to your childhood, confront existing fears and come out at the other end with a fresh and rejuvenated perspective of life. It’s basically like fitting in 1,000 healing therapy sessions in one hit.

There have been many cases of users reporting how they have been healed from comprehensive problems such as addiction or depression in one or two sessions. Sounds incredible, right? Of course, it’s not for the faint-hearted. There are some pretty extreme side affects that come with ayahuasca including continuous vomiting and diarrhoea. And the trip itself isn’t the happy, laughter-filled bubble you experience on a night of shrooms. Check out these snippets of an account from writer Conor Creighton:

In one incident after the next, I revisited traumatic chapters of my childhood. It played out like some celebrity retrospective—only instead of showing the best clips from my long career, I was forced to witness the moments that had bruised me most. I was in the womb feeling my family’s stress, in school running from bullies, and in my teenage bedroom listening to Smashing Pumpkins while writing poetry with rhymes like “blunt knives” and “short lives.”

My stomach was a mess, but I couldn’t puke, so I tried to shit.

Defeated, I went back out to the room, lay down on my mat, and suffered.

Ouch. Now you’re probably wondering why anyone would put themselves through this traumatic experience. Well, as mentioned, it’s not all bad and you come out at the other end on a positive psychological level:

I fell asleep and the next day woke up early, feeling amazing. And for now, that’s how things have stayed. Ordinarily I’m pretty anxious. I’m not a good sleeper, I’m shy, and I’m pretty horrible at making decisions. But so far, all that’s disappeared. Whatever happened that night shook my little blockages free—or, as a psychiatrist would put it, broke my coping habits.

Now before you start to wonder if this is just one user who got ahead of himself, noting down his experience too soon for the effects to wear off, pretty much every other story runs in a similar path. Why do you think it’s been utilised by ancient tribes for so many centuries? And now thst the Western world is beginning to take notice, there are even psychiatrists in the U.S. and the UK who recommend taking ayahuasca as a form of therapy.

So what exactly is this plant? Well, let’s let David Nutt, the founder of Drug Science, explain that for you:

Ayahuasca is a way of making available DMT, a very powerful stimulator of serotonin receptors in the brain.

Basically, DMT doesn’t normally get into the body because it’s broken down by the stomach. But what native Americans learned hundreds of years ago was that if you make a drink with the plant product that contains DMT, and mix it with a bark product, the bark product acts as a blocking agent and the DMT can get into the body. 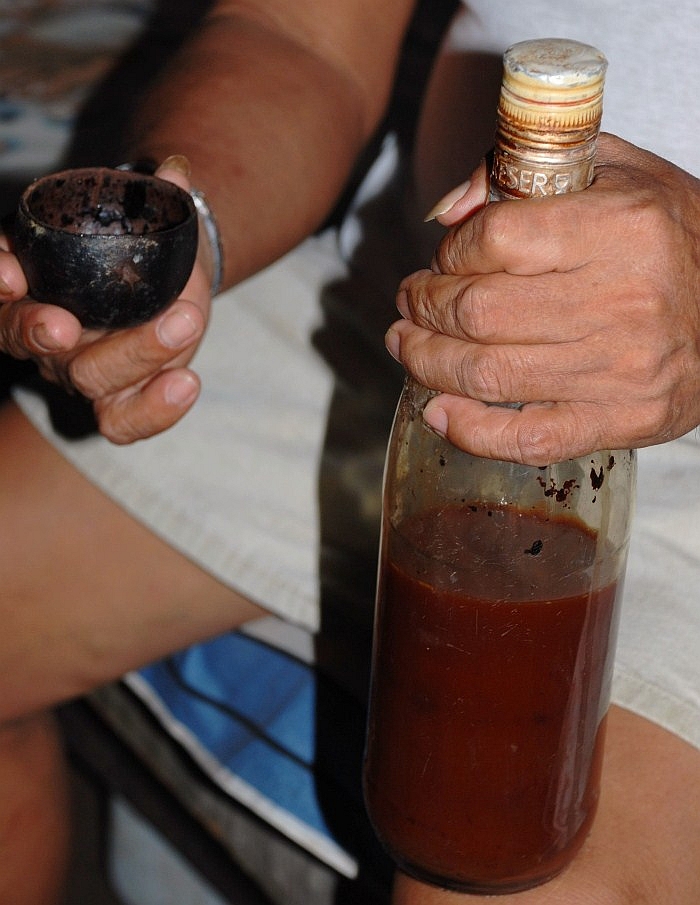 So it sort of acts like a bridge that allows the psychedelic compound, DMT, into your bloodstream. And as many of you might know, when taken correctly, taking DMT is known to be a positive life-changing experience.

Now before you pull on your Harem pants and go in search of a long-bearded spirit doctor, it’s worth noting that this drug is still illegal in many countries, including the UK. Back in 2011, Peter Aziz became the first British man to go to prison for administering ayahuasca on a retreat in Weston-super-Mare. And the Home Office maintains its position that the drug is illegal.

Nevertheless, we all know that most illegal substances are still available across the country – you’d just have to do some internet digging to find them. Or the other option is to travel to Colombia or Brazil and take part in a truly authentic ceremony where you would benefit from the guidance of an experienced shaman.

If you do decide this is something that you would like to experience, it’s absolutely essential that you do your research first. With the wrong shaman, things can take a dark turn. In 2014 a British teenager named Henry Miller died after taking part in a shamanic ceremony in Colombia that included consuming ayahuasca tea. The 19-year-old was with a group of tourists at the time, experiencing the retreat in the Colombian forests. After Miller fell ill, the rest of the group were ushered back to their lodgings where they were assured that the teen was being looked after by the tribespeople. His body was later found dumped in the nearby landscape.

This is obviously a very rare and extreme example of ayahuasca gone wrong, but it does highlight that if you’re going to sign up for an ayahuasca retreat, do your research first, do it in a place where you have access to medical care and make sure that you hear from other people who have already done it so that you can review if it’s right for you. And if any of you do go through with it or you’ve already had an ayahuasca experience, write to us and tell us what it’s like. We’d love to know.

And if you can’t be bothered with the potentially scary hallucinations and mind-altering state of consciousness, why not check out these ten gifs that will make you feel like you’re tripping on acid without actually taking acid. All the fun, minus the head-fuck.