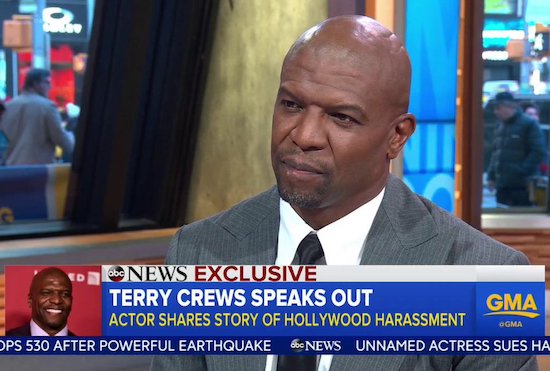 ‘He literally took his hand and squeezed my genitals.’

The culture of sexual misconduct in Hollywood has been under the microscope for the past few weeks and it seems as if men have been the victims of sexual assault and harassment almost as much as the women.

The latest man to speak out about his experiences is actor Terry Crews, who has publicly named Adam Sandler’s agent Adam Venit as the man who sexually harassed him. He revealed all in an interview with Michael Strahan yesterday on Good Morning America – check it out below:

Wow. It’s kind of crazy that this happened as recently as a year ago when most of the allegations that are coming out are historic, but it just goes to show that the culture still exists and is prevalent in Hollywood.

You’ve gotta give props to the guy for speaking out too as not only did it sound like a deeply uncomfortable experience, but naming this powerful guy could have severe repercussions for his career and life. Hopefully Venit will get what he deserves though.

For more of these allegations, click here. Literally so many of them.