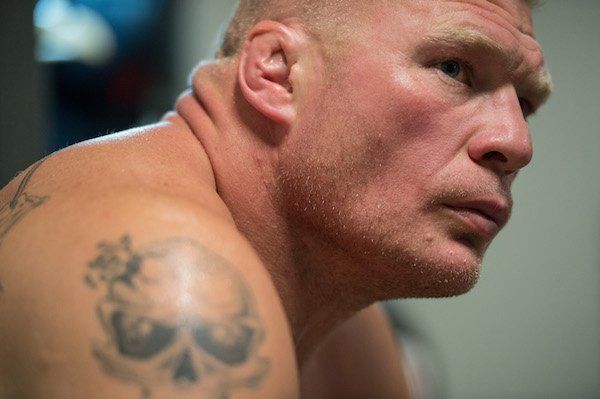 Is Brock Lesnar about to get #MeToo’d?

A whole bunch of (mostly British) pro wrestlers have been accused of sexual assault/harrasment this week as part of the #SpeakingOut social media movement, which seems to be the 2020 version of #metoo.

WWE legend Terri Runnels, 53, has now accused Brock Lesnar of sexual harassment after he allegedly called her name and flashed his penis at her backstage at a WWE show in 2001.

I don’t have a lot of respect for Brock, I don’t think Brock respects wrestling fans. Brock did something that if it was in today’s day and time … You know.

He showed his penis to me and called my name as I was walking past where he was in the dressing room and opened his towel so I could see his manly bits. I would have much rather him not be so disrespectful of a female that’s been in this business for as long as I have been.

He knew he was gonna have a lot of power, that they were gonna give him the strap but at that point, I’d been in this business a long time. I have respect and what he did was very, very wrong. From a respect standpoint, from a sexual harassment standpoint, it was wrong.

I like that although she points out it’s completely disrespectful to do that to a female, her main gripe is that he dared to do it to someone like her who was already established in the wrestling business, having shown up in the mid-90s as a valet for Goldust (her former husband Dustin Rhodes). Brock however was still a rookie at the time (early 00s), and so pretty shocking he would pull a stunt like this at a long-serving employee like Terri Runnels.

Like she says though, he knew he was destined for greatness and it was a way different time back then anyway, so he got away with it. In fact even if Brock Lesnar did something like that today, I bet it would still be swept under the rug. I mean how do you even ‘cancel’ a 6-foot-1, 286-pound antisocial viking who doesn’t care what anyone thinks of him? Some people are just immune to cancel culture and Brock Lesnar is one of them. Can only hope he wouldn’t pull this sort of move nowadays as a married father.

For a look at Brock Lesnar’s first TV appearance in which he absolutely destroyed little Spike Dudley, click HERE.