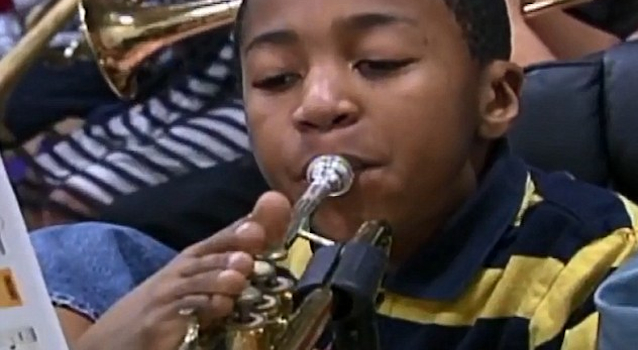 Instead of using his fingers, Jahmir Wallace uses his toes to play the trumpet.

Ten year old Jahmir Wallace can serve as an inspiration to us all as he put the fact that he was born without any arms – usually a fairly integral part of your anatomy, especially when learning to play a musical instrument – behind him and managed to learn how to play the trumpet, recently appearing in his school’s annual winter concert.

Jahmir lives in New Jersey and decided to try and learn a musical instrument because his sister was really good at the piano. He settled on the trumpet and his teacher – Desiree Kratzer – spoke with a local music store and got them to customize a stand that enabled Jahmir to play the trumpet using his toes instead of the fingers that he doesn’t have. The result was a massive success.

Jahmir describes the first time he tried the instrument: ‘I kind of felt excited. I kind of felt like, oh man this is kind of comfortable and it kind of felt like this might be the one for me’. He went on to smash it and totally rip it up in the annual winter concert.