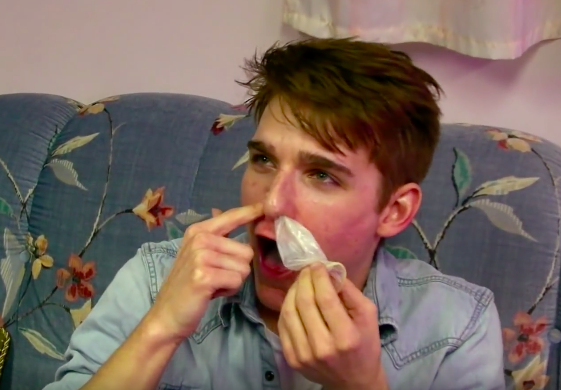 Social media has been responsible for a hell of a lot of stupid trends this year, with the most ridiculous easily being the Tide Pod challenge where kids would film themselves eating Tide Pods and subsequently dying.

I said that was the stupidest one and it probably still is but this latest one is definitely a contender as well, as it’s emerged that teens are now snorting condoms through their noses so that they come out through their throats in the latest instalment of idiocy to hit the internet. It’s called the condom challenge, not that that’s a big surprise or anything I guess.

Anyway, if it isn’t obvious that doing this could actually lead to your death through choking or any different amount of infections from stuffing a rank condom through your nose, then Bruce Lee – an associated professor at Johns Hopkins Bloomberg School of Public Health – decided to spell out the dangers for you just in case:

When is using a condom a bad idea? When you are trying to snort it up your nose and pull it out through your mouth. If you ask, ‘why would anyone ever do that’, then you obviously haven’t heard of the ‘Condom Snorting Challenge’.

The condom could easily get stuck in your nose or your throat, blocking your breathing or causing you to choke.

Even if you manage to successfully pull the condom out through your mouth, inhaling a condom up your nose would be very uncomfortable and potentially quite painful. Would it really be worth all that just to get more likes and views?

Apparently so, as more and more people are uploading videos of themselves taking part to YouTube. You can see a couple of them on this page, and whilst I’m not going to lie and say that they aren’t entertaining, I’ve gotta say it’s more with a mixture of revolt and fascination I watch them rather than awe. Maybe sympathy too as it really is that pathetic. Just enjoy these videos and don’t try this at home basically.