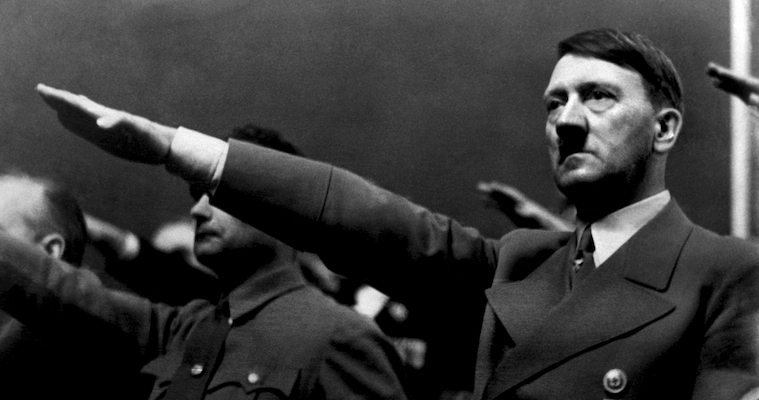 Having Tourette’s Syndrome is unlucky enough as it is, but it probably sucks even more though if it makes you constantly make Nazi salutes though.Especially when there are some tough black dudes around.

In Germany in some town near Hamburg, a teenager called Gerrit Oeller got his ass kicked by a black dude who thought he was insulting him as Gerrit kept constantly making Nazi salutes to him whilst they were both on a train. I mean, that’s kind of fair enough because racism is a pretty big issue and black people seem to understandably hate it, so if some punk ass retard kid was just constantly giving you Nazi salutes whilst you were on the train going about your business eating fried chicken or whatever you might flip out and lamp him. But then you read some more into the story and find out that the kid actually had Tourette’s (you know that condition where people can’t control their bodies properly and swear uncontrollably at people and stuff) and actually couldn’t help moving his arm up and down like this and you’ll probably think that the black dude was a little out of order because he punched him straight in the kisser.

If you read even more into the story, you’ll find out that Gerrit Oeller was actually with a couple of his friends at the time of the attack and these guys actually told the black guy that the kid had Tourette’s syndrome and couldn’t help what he was doing. However, whilst they were trying to explain this to the black dude Gerrit was getting a bit nervous and  this made him grin wildly at the man and start frothing at the mouth – again because of his Tourette’s. Gerrit explains it in his own words: ‘He asked me if I thought it was funny and it made me nervous, which made me clench my teeth and he thought I was grinning at him. That was when he hit me. I went out like a light.’ The black dude fled the scene whilst Gerrit was taken to hospital and treated for a swollen jaw and cut eye. This black dude sounds like he could pack a punch huh? Pow pow.

I bet this black dude feels like an asshole now though. Or if he doesn’t, he needs to or is just an asshole anyway. He was getting pissed at someone acting racist toward them and beat them up – I mean that can kind of fly – but when the kid has a medical condition and the people around him are trying to explain it to you, you’ve gotta be a real asshole or just really angry about everything to assault him. I would say maybe the black dude is one of those guy’s who is really aggro all the time about everything because he has a small dick but then I remembered he was black so we all know that that’s a pretty outrageous statement. So it had to be something else. Maybe Luis Suarez racially abused him in a football match or something. In any case the guy needs to feel like an asshole and be publicly humiliated or something because he  was essentially using Nazi tactics on a minority that was probably even more discrimanted against than his own. Oh the irony. How the tables turn.

This story also provides an explanation for what I’m sure many of our readers saw and were outraged by – or more realistically probably just laughed their asses off  at – for a little bit during the Olympic opening ceremony when the athletes were coming out.  When the Germans came out it cut to the crowd to see an old German man doing what looked like a Nazi salute over and over again which was pretty insane if you saw it. Actually thinking about it most people were probably asleep during this part because it was SO BORING when all the athletes came out for 2 hours or however long it went on for- seriously, it was like being stuck in the worst k-hole ever – that you probably missed it. Still, if you were asleep then you didn’t have to watch Paul McCartney totally screw up the ceremony by completely sucking. But yeah, if you missed the (alleged) Nazi dude from the Olympics opening ceremony then here he is:

So yeah, it seems logical that this guy wasn’t actually doing a Nazi salute but actually had Tourette’s syndrome – the same level as Gerrit Oeller – and was just going off when the Germans came out. I guess it isn’t that much of a leap to think that two people must have exactly the same condition because they’re from the same massive country, right? I guess it’s  either that or he’s a Nazi. If it’s the second option then he had better watch out for that black dude because he’s still on the loose and is probably looking to smash some other people in the face for their  (alleged) Nazi beliefs. He punched a 16 year old disabled kid so I’m sure a really old man won’t be too much of a jump for him either. Everyone should probably watch out.