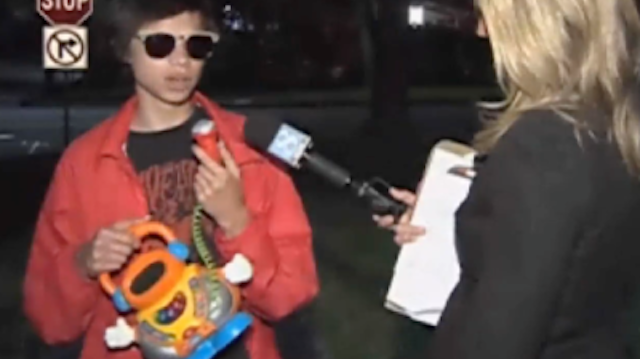 After being caught attempting to throw a Project X party, 19 year old Nathaniel Gray agreed to be interviewed by local press – but only if he could hold a little kid’s toy microphone.

19 year old Nathaniel Gray had an excellent idea – to throw a huge fuck off party in the woods near his house in Salem, Massachusetts with a bonfire, loads of people, loads of drink and probably loads of sexing – and it was going to be completely swell. So swell in fact that he christened it (slightly egocentrically) Project Nat after the Project X party where a whole neighbourhood gets destroyed. Safe to say it was going to be a sick party then.

Unfortunately for Nat though, the cops were spying on his Twitter feed and got wind of his plans and bust the party site before it had a chance to go down. Completely lame. They also arrested Nat and charged him with a bunch of shit like providing minors with alcohol and attempting to have a sick party or some other such crap that you should only really stick on people if you’re actually working for the fun police, not the real police.

The best part of this story though is that Nat would only allow the local new station to talk to him if they filmed him speaking into a brightly coloured toy microphone in the middle of the night whilst he was wearing sunglasses and a bright red jacket. You might expect said interview to be comedic given his appearance but it’s actually pretty straight and serious – I can’t decide whether that makes the interview better or worse though.

Either way, it’s a completely sick get up and one that more people should consider employing when going on TV to proclaim their innocence for a crime they’ve been accused of, as it clearly is going to get people on your side.