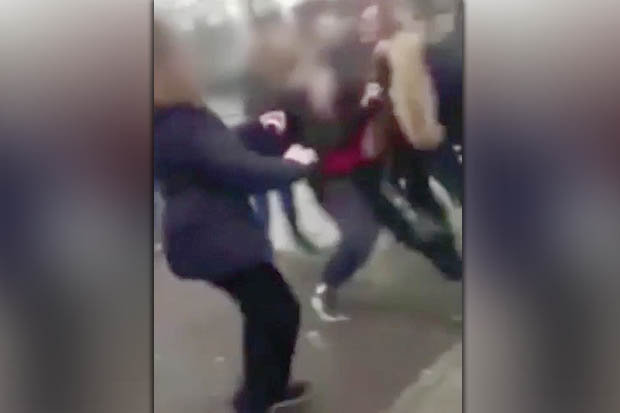 The victim was left unconscious.

A Snapchat video has surfaced online showing a woman being assaulted by a gang of girls in Liverpool, all thought to be teenagers.

In classic girl fight style, the woman is pulled around by her hair as the other girls chime in or laugh and cheer. According to the witness who loaded the video online, the woman was left unconscious as onlookers rushed to help her.

Merseyside police are now appealing for any information:

This is a disturbing incident where a young woman has been targeted and assaulted by a gang in an unprovoked assault.

It is totally unacceptable and we will do everything required to find those responsible.

The area was busy at the time and several people stopped to assist the victim.”

We would like to speak to anyone who witnessed this incident or has information about those responsible.

Unprovoked attack – they’re probably just aggy little chavs who wanted to prove how “hard” they are. Hopefully the police catch them and chuck them in juvie. They need a serious reality check.

I don’t know what’s up with teenagers these days. They should just do funny shit as we did like the Milk Challenge. Harmless fun.