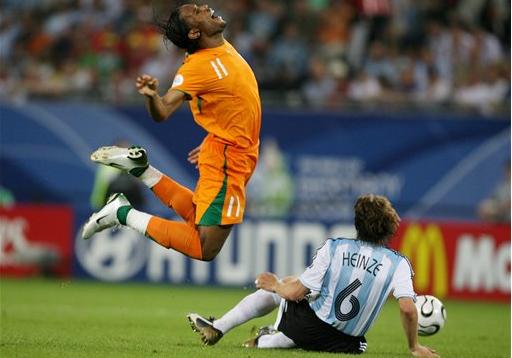 Diving. Some call it the biggest problem in the modern game of football. We’ve all seen Drogba, Ronaldo and David Ngog (maybe nobody remembers that one but he did a pretty bad dive against Birmingham when we were beating them 2-1 at Anfield thanks to a Cameron Jerome screamer and a triple header which enabled them to draw 2-2) pull off some swan dives that are Oscar worthy in their own right and are probably universally perceived as better performances than say, Jennifer Aniston in her new movie.

However, despite all their faults, I don’t think any of them would ever be as dumb/ridiculous as to try the move that young Chilean international Carrasco tried in a recent Under 20’s match against Ecuador. The defender actually grabs the hand of the striker Edson Montano waiting for a throw in and punches himself in the face with it and goes down like a sack of potatoes. Fortunately, for fans of fair play all over the world, the ref had a clear view of this and awards a free kick to Ecuador. Carrasco rolled around on the floor for about half a second before realising he got found out and shrugs off sheepishly. Embarrassing. Check it out below:

Maybe we should be paying more attention to the Under 20’s tournament in South America. It’s also the competition that bought us the first ever miss of the week.