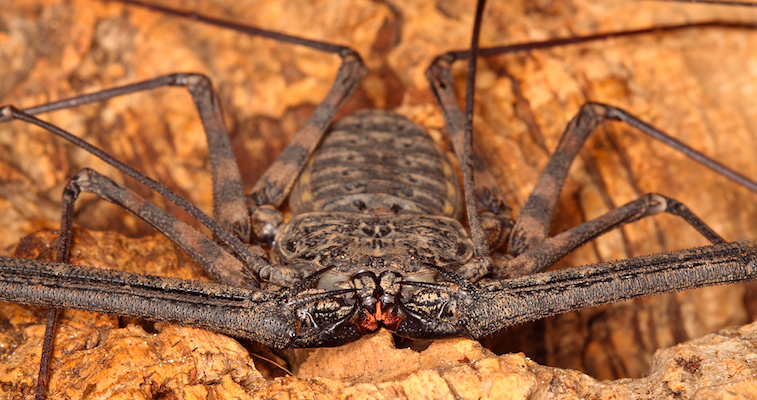 The tailless whip scorpion is a cross between a scorpion, a spider and a daddy longs legs and it freaks me out, but these dudes just pick it up and let it crawl all over their faces. Completely gross and terrifying.

I don’t know who these guys are in this video but they are batshit crazy. Not crazy like a Russian breh in that they’ll hang off really large cranes with no safety equipment but crazy in that they let giant gross scary animals crawl all over their faces when they could probably do pretty much anything else in the world at that minute. I don’t know which kind of crazy is more crazy but I know that I am definitely not into either type of crazy. I think I would probably mess around on top of a crane than go into the Amazon and search around for deadly animals that are super scary and let them crawl over my face without any regard for the consequences though, although that’s pretty easy to say when I have no intention of ever doing either.

I mean an animal with a name like the tailless whip scorpion is gonna pack a punch and is gonna be able to kick your ass, you’ve gotta at least think that right? And then when you SEE IT, well if one of those was crawling across the room from me I would be out of there in a flash let me tell you. If it was blocking the only exit then I would be looking for the nearest weapon to try and squash the little dipshit as soon as humanly possible. I am just so not into creepy crawlies. Especially not ones that look like a cross between a scorpion and a really scary spider AND a daddy long legs. Gross.

â˜› Check This Out Next: This Is The Grossest Picture You Will See Today. Or Probably This Month.

But yeah I don’t know who these guys are and I don’t know if I want to know who they are if their idea of fun is going out into the Amazon rainforest in the middle of the night and looking for really scary animals to hang out with and let crawl all over their faces.  Their YouTube channel has a link to some another adventures from a series they’re calling ‘The Amazing Amazon’ so I guess they’re hoping to become YouTube sensations by hanging out with really creepy animals and letting them crawl all over them, which I guess isn’t a bad plan considering how people like Peter Andre have fared following a stint on I’m A Celebrity Get Me Out Of Here.

Basically in this video they head into the Amazon, catch a tailless whip scorpion, have a look at it for a bit up close (all the while just holding it in their hands, even though there are a bunch of fangs and real scary daddy long legs legs on it)  and then let it crawl all over their faces. It makes me seriously squeamish just watching it so if you’re of the same disposition I suggest you give it a miss, don’t say I didn’t warn you.

Check out the video below and hopefully enjoy it:

â˜› The Amazon Is So Weird: Snake That Looks Like Giant Penis Discovered In The Amazon

â˜› Battle To The Death: Spider Vs Wasp