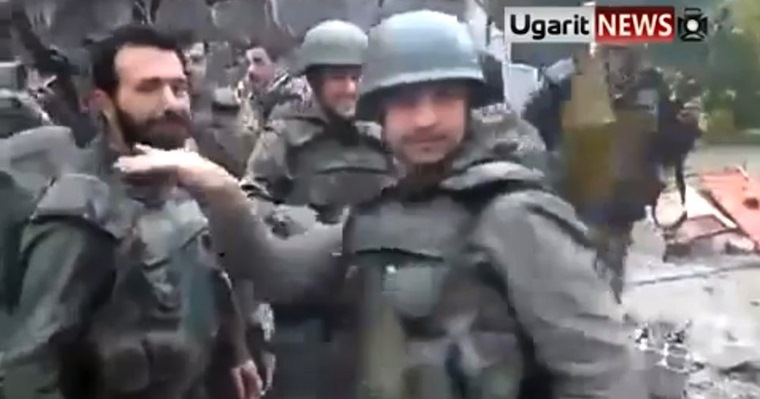 Machine gun-wielding soldiers in Syria take a break from blowing each other up to bust a few moves to Usher’s “Yeah”.

It’s not the most perfectly choreographed dance routine we’ve ever seen (everyone kind of abandons the routine and starts doing their own thing at around the 30 second mark), but these soldiers in southern Syria do actually appear to be dancing to Usher’s “Yeah”, perhaps familiarising themselves with the kind of audio torture that could await them in Guantanamo Bay one day.

â˜› Read Next: Insane Photographs From A Public Amputation in Iran

Among the dance moves on display are the “fist pump”, the “one, two step” and the “walk like an Egyptian” (perhaps paying homage to their Middle Eastern neighbours?). Exuding nothing but positive vibes and hopefully having switched on the safety locks on their assault rifles, the soldiers then form a Conga Line as if purely by instinct, beaming from ear to ear and flashing peace signs to the camera (the dance equivalent of a Freudian slip?)!

â˜› Watch Next: US Atomic Bomb Tested On US Troops

Everybody seems to be having a good time, which is the important thing. If only we behaved like this more often instead of fighting each other all the time! However just when you think they might be about to take their dance moves on tour and begin spreading the feel-good vibes of Usher, they stop dancing and break into a chant of “With our souls! With our blood! We sacrifice for you Bashar!”, concluding with bursts of automatic gun fire to the sky.

Although the clip hasn’t been independently verified the uniforms are consistent with those issued to Syrian government soldiers. Tellingly, it has appeared on both pro-regime and anti-regime YouTube channels.