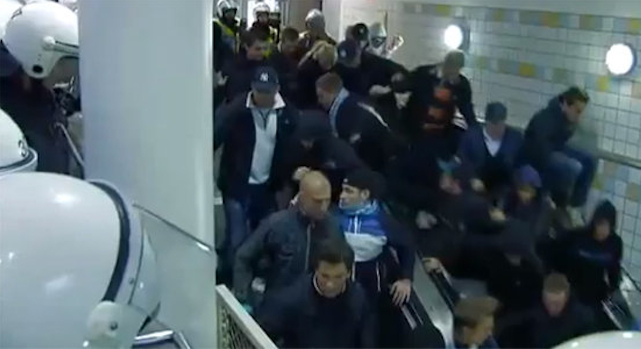 Over in Sweden, police have come up with a novel way to control football violence on derby day.

Football rioting is kind of cool to watch in movies or from afar but when people actually end up dying or seriously hurt it isn’t that cool at all, although the people involved probably deserve all they’re getting for being dumb enough to start massive fights over football matches anyway.

In any case, due to the potential for rioting at football matches, there always has to be a huge police presence at them now to try and deter hooligans from fighting. The fighting and threat of violence is particularly concerning during a derby game between two rival teams and the police presence is usually maximised for these encounters.

Over in Sweden on Thursday night, the police came up with a new tactic to deter rival sets of fans from fighting each other. The match was a local derby between two of the big teams in Stockholm, AIK and Djurgarden and fans were set to clash as they entered the metro and began angrily exchanging with each other on the escalators. To make sure that the  fans didn’t come to blows with each other, the police simply turned up the escalators to super speeds to move along one set of fans and diffuse the situation. Genius.