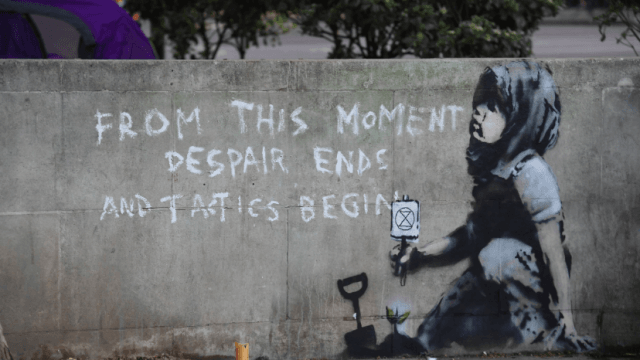 The last couple of weeks have been full of reports of climate change protesters disrupting everything in London to raise awareness about the fact that the planet is literally overheating – although most people seem more concerned about their days being disrupted.

Not gonna lie, I fall somewhere in between the two camps but I do realise that climate change is a very real problem that we probably need to do something about soon, and it seems like Banksy would agree with me as some of his artwork has been found near the Extinction Rebellion site in Marble Arch. The mural features the image of a small child holding the Extinction Rebellion logo and the phrase ‘from this moment despair ends and tactics begin’:

Wow. Thank you #Banksy for supporting @ExtinctionR. As rebels leave #MarbleArch heads held high, this piece appears in the central reserve. “From this moment despair ends and tactics begin” Be on the right side of history, join @ExtinctionR. #RebelForLife pic.twitter.com/ZeToJ1qxjm

Nice. In fairness to the protesters, they have managed to raise £200,000 since all of this began so they have been successful in their objectives – it’s just a shame that they’ve had to piss everyone off so much to achieve it.

I guess that’s the whole point of a protest and how you make stuff happen though, so fair play to them. Hopefully climate change is addressed by the proper channels soon, but when the President of the United States is a huge denier I don’t think you’re gonna get much chuck out of it anytime soon.

For more Banksy, check out this video of him allegedly at work. Surely not?