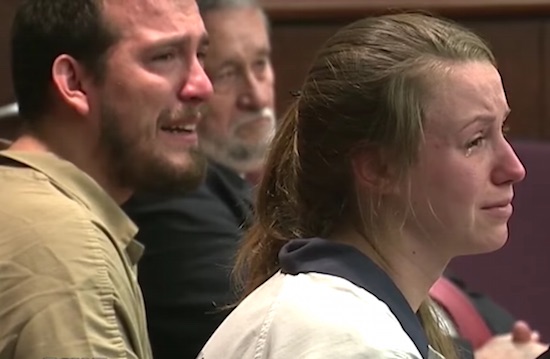 That’s what you get.

It seems like racism has become ever more prominent in the United States following the election of Donald Trump and his Muslim travel ban, but there is some hope that not everyone in power is a moron when stories like this one emerge.

Back in 2015 – just days after white supremacist Dylan Roofe had killed nine African Americans at a church in South Carolina – 26-year-old Jose Ismael Torres and 25-year-old Kayla Rae Norton were accused of storming an 8-year-old black boy’s birthday party near Atlanta, Georgia and threatening to kill the partygoers. They also pointed shotguns at the children.

15 people were involved with the disruption, but only four were charged with felonies. The other two pleaded guilty and received lesser sentences, but Torres and Norton protested their innocence and after they were found guilty due to video footage of the event, Torres was sentenced to 20 years in prison and Norton 15.

Their actions were motivated by racial hatred.

This is behaviour that even supporters of the Confederate battle flag can agree is criminal and shouldn’t be allowed.

Dickheads got what they deserved I suppose and it’s great that harsh sentences are finally being handed out for actions such as these, especially as in the wake of Trump’s presidency actions like these seem to be more prevalent. Anyone who thinks that another human just existing and celebrating their birthday party – especially one as young as 8 – is negatively affecting their lives in any way really does need to be taught a lesson.

For another comeuppance example, here’s a racist bully getting what he deserves. Love those ones.