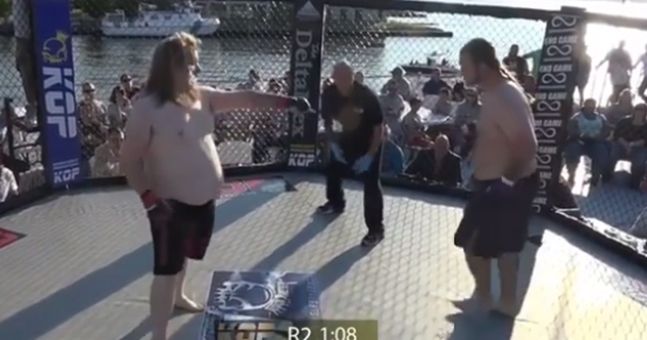 Super heavyweight MMA fights are always fairly unusual as both fighters are normally so out of shape that they run out of gas fairly quickly and the contest can quickly devolve into the pair of them clinching against the cage or wildly trying to punch each other.

Or you could see what happened in this match between Jesse Reasoner and Sean Needham over the weekend. The guys were competing at KnockOut Promotions’ 57th event and it looked like Reasoner was going to pick up the win after he consistently laid into Needham in the face over and over again.

It wasn’t to be though as clearly Reasoner has expelled a lot of energy getting those punches in, instead preferring to puke in the middle of the ring, leading to an instant disqualification and Needham’s first ever win on his debut. Take a look at the footage here, although it is pretty rank:

Gross and bizarre – I hope they managed to clean up the cage well enough for whoever was fighting next. What a way for Needham to pick up his first win, but I suppose they all count don’t they?

For more puking, check out this guy doing an absolutely epic one on the New York subway. Yuck.