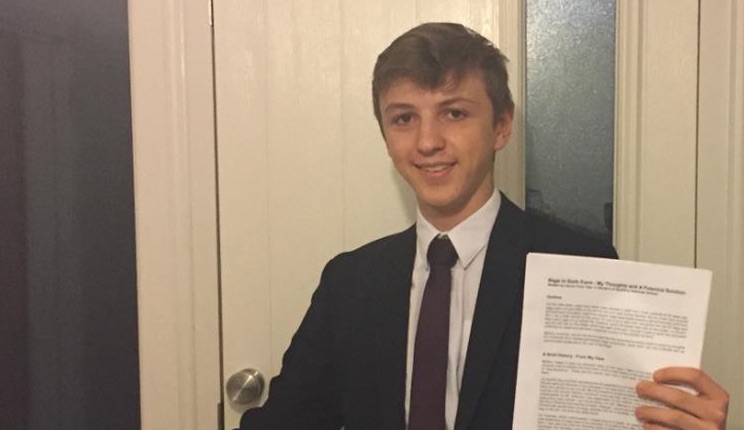 I would have praised him for his ingenuity.

Remember back in school when you would have about three books for each different subject and have to carry around seven sets of books a day because of this? How the hell are you supposed to do that without a bag?

I think it would be next to impossible to carry all that crap around, but despite that headmaster Steven Wilkinson from Spalding Grammar School in Lincolnshire thought that it was a good idea to ban students carrying bags throughout the school. He did this for ‘health and safety’ reasons after a younger child had been injured by an older one swinging their bag onto their shoulders.

Whilst I can respect that may be a slight issue, the fact that children are supposed to carry all their stuff in their hands or whatever is quite frankly ridiculous and this sentiment was echoed by many members of the school. The most vocal of these was 17 year old Jacob Ford, who presented a 3300 word dossier of evidence as to why this was stupid, as well as carrying his stuff in a bunch of other different vessels like a wicker basket, saucepan, sandwich bags, part of a lawnmower and a microwave oven.

Despite the fact that Jacob’s silent protest has probably gained him access to any university in the world he wants to attend, it’s also got hims excluded from school for his troubles. Here’s what he had to say about the whole situation: 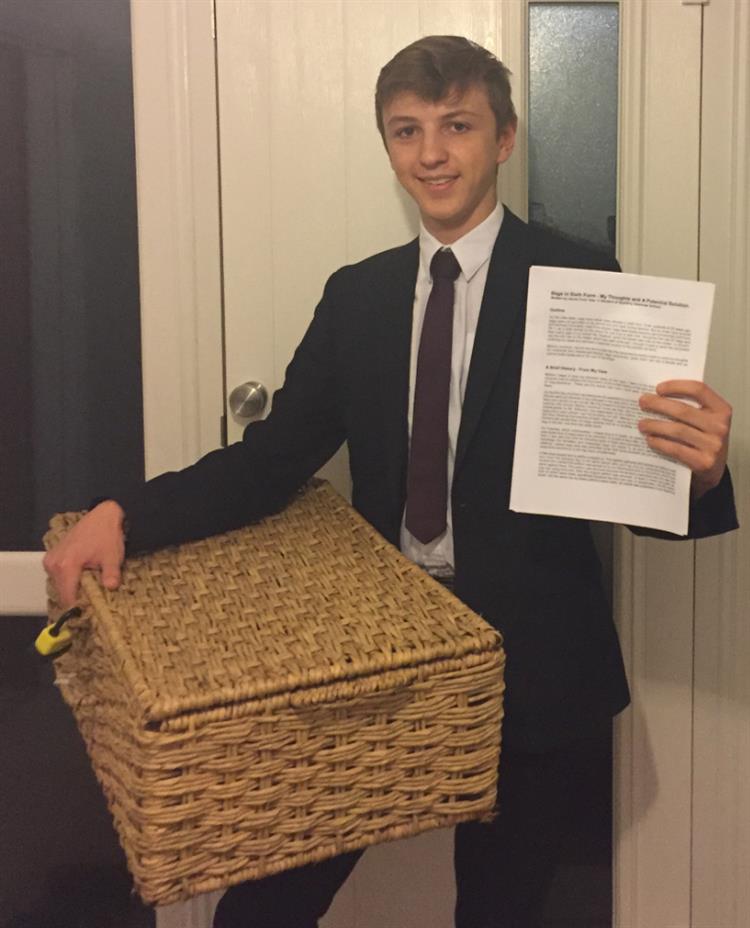 Bags were never allowed in Years 7 to 11, but they were for sixth form students.

This year, we had an assembly at the start of term where we were told that there was no change on the bags rule.

Then two weeks later, we had another assembly where we were told that all bags were banned because of health and safety reasons after a Year 7 student had been accidentally hit by a bag.

Later, the school softened the rule to allow girls to use handbags, while boys could use laptop and messenger bags.

But most sixth-formers need to take folders, books, pencil cases, calculators and other items to and from school.

We also have senior games lessons on Wednesdays when we can carry any sort of bag to school.

So when we were told on Tuesday that the petition had been taken down because it gave the school and students a bad reputation, I wrote a 3,300-word document of defence for my views on carrying bags to school which I submitted to the headmaster, my form tutor, the head of sixth form and my head of house.

On Thursday, I was called into the headmaster’s office to discuss my document and was told that I had undermined my position by writing a serious report, only to follow it up by taking ridiculous items to school.

I was told that I had a choice to make, either to have a serious discussion about the issue or to continue my rebellious streak and force the head to take me out of circulation.

Then I found out that five of my peers had gone to the head’s office to have a discussion about the bags rule, but I hadn’t been invited to the meeting because of the way I’d been acting.

Just after the meeting, I sent a text message to my brother and mum about my meeting with the head.

Then on Friday, to continue making my statement in the issue, I put my books in a microwave and took it to school.

After period one on Friday, a teacher went down to the head’s office and told him everything I’d done.

I was then told to go and see him at which point he explained that I was going to be put into isolation.

Then he wanted to know who had told my mum that I’d been isolated.

I wasn’t sure what was going to happen but not handing in my own phone, I was excluded for breaching the school’s trust.

Spalding Grammar School has changed so much since Mr Wilkinson came three years ago and the new rules given to us have been ridiculous.

But the bags policy is something that I feel really passionate about and, rather than knock my confidence, it’s done the opposite because I’d never had any strong feelings about anything before now. 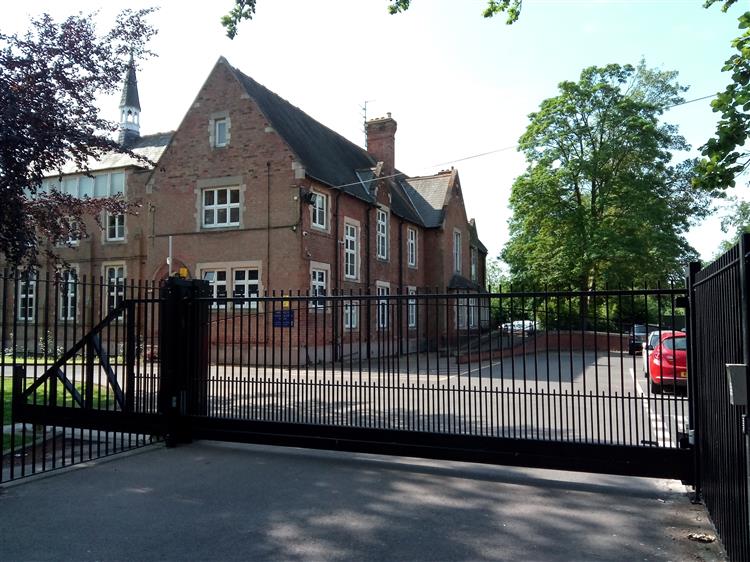 I mean fair play to the kid. If nothing comes of it at least it’s going to look good on his UCAS form and might even get him laid, as it doesn’t look like he’s having too much luck on that front given his current look. 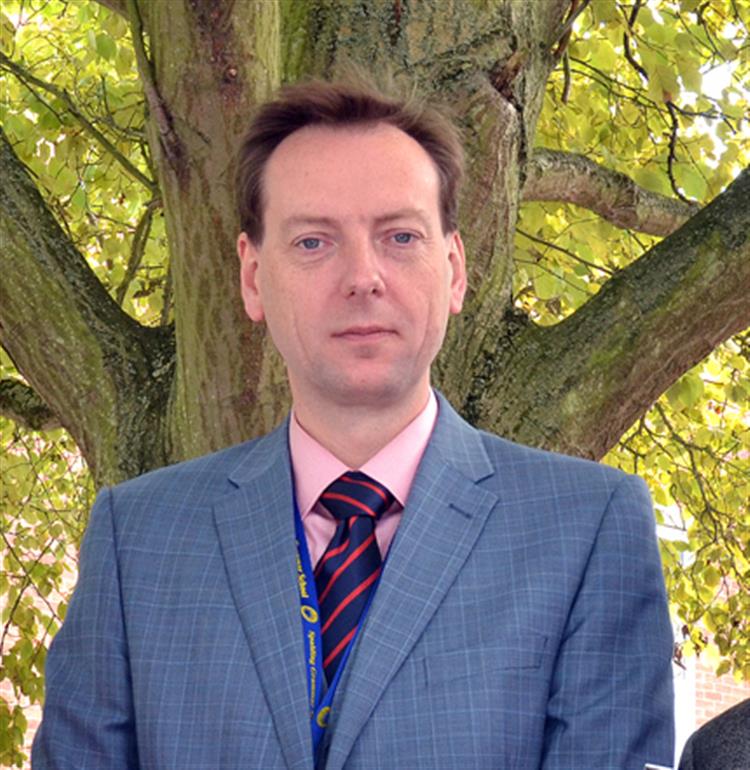 On the flipside, Mr Wilkinson (above) looks and sounds like an absolute twat so I’m fully backing this kid’s campaign against him and his ridiculous rules. Here’s his response:

The facts that have been presented are far from the full picture.

We have a student who has behaved in an increasingly inappropriate way, actions the likes of which I have never witnessed, and who has been sanctioned entirely in line with the school’s policies.

What disappoints me most is the fact that, rather than working with us, the parent concerned has encouraged and is now seeking to glorify her son’s behaviour.

Ugh. This guy just reminds of all the most pompous stuck up teachers that we had at my school who had clearly been bullied when they were kids so thought the only way to make them feel better about their lives was to obtain the lamest amount of authoritative power possible and take it out on the next generation of children. We all know them and Mr Wilkinson is definitely one of them. Can only hope he gets fired and this dumb rule about bags gets cancelled. We’re with you Jacob Ford.

For more bags, check out this cool story about a vomit bag on a plane. Guarantee it isn’t what you think.