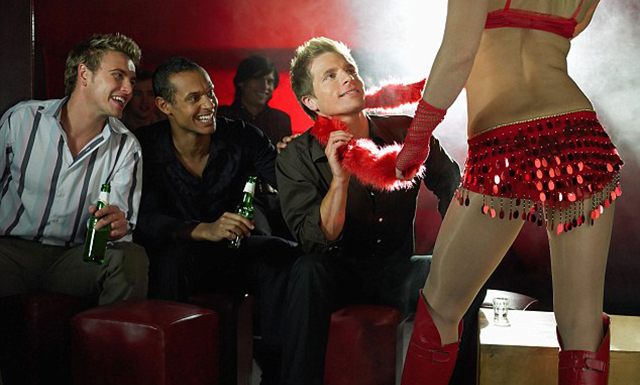 Here’s the story as told by Redditor ABrooksBrother:

It started out like any other Saturday, but today was Mike’s 19th birthday and I wanted to do something nice for him. It was three in the afternoon and I had no gift ready and his big day was already halfway over. As I’m sitting in my dorm room and I come to the conclusion that I now am of legal age to rent a stripper. With this idea in my head, I raced down the hall and find my two close friends and I pitch my idea to them. They love it.

My next step is to ask my floor RA If there are any rules against having strippers in the on-campus dorm rooms. My RA thinks I’m kidding but he asks his supervisor anyways. After they look it up, there is no rule against strippers in the dorm rooms, so our college gave us the green light. Bingo.

So how do 3 eighteen-year-old college kids find a classy stripper hours before the big day, they hit up Yellow Pages. I called some company and the operator give us a quote of $300 an hour. Now to three college kids, 300 bucks is a fuckboat of money. I said “thank you, will keep looking”, but in the back of my head we dismiss the idea and moved on with our day. Fast forward to 6 PM, I get a call back from the stripper company. The lady says she can do $200 for half an hour and transportation costs. Honestly, we don’t care how long the stripper is here, we just want to say we got our friend a stripper for his birthday. 200 bucks split three ways is still a lot of money, so the three of us rounded up six other kids and split the cost nine ways. Mike was going to get Virginia’s classiest two hour notice stripper.

The operator puts me in contact with a stripper, and as soon as I start talking to this girl I realize how big of a mistake we had just made. This stripper probably drank rocks as a kid. Without any photo evidence of who she was, we told her to come and she drove 45 minutes south to our college. I greet her when she arrives and she steps out of the car and I thought maybe she was the escort for the real stripper, but I was sadly mistaken him. Maybe this girl was a soft 2 out of 10, oh and she was 32. Looking at her, I was ready to pay her to keep her clothes on.

Well we already invested the money, no turning back now. Mike was having a really bad day, and his fraternity was having a social with a popular sorority right before the stripper was about to arrive. We planned everything out in secret so we would surprise him and we couldn’t have him leaving before the big surprise. I call his big brother in the fraternity and tell him to keep Mike at bay. Now on top of Mike’s terrible day, he gets a phone call saying that he is not allowed to come to tonight’s social and he’s in trouble.

I walk the stripper from her car to my dorm room and I try my best to make small talk. How do you even make small talk with a stripper? For the three minute walk she was able to tell me about the time she was raped as a kid, how she watched her dad get shot in the face, and about her two kids in high school. Lovely. I get to the room where all the guys are waiting and I knock on the door three times. The room erupts in chaos as nine college boys turn into rabid dogs. The stripper and I walk in and my friends faces turn from astonishment to terror. One of my good friends looks over at Mike, pats him on the back and says, “uhhh Mike, happy birthday dude, we bought you a stripper” and to my astonishment, he sprints over to the sink and throws up.

Having already paid her in cash, we exit the building and I bring up a refund. This is where all hell breaks loose. The stripper start screaming at me saying she does not give refunds, and threatens me with rape charges. I call the company and try to work something out, but they tell me that they have fired the stripper and they are no longer affiliated with her. I tell her if we don’t get our money back I’m going to call the police. I dial 911 on my phone but do not press the call button.

What I didn’t know at the time was that when you dial 911 from my phone, it automatically sends the call. The phone is not my ear, but all the dispatch officer hears is a lot of shouting over money and rape. Within 45 seconds, four police officers are running at the two of us who are standing in the middle of our quad with flashlights in our faces screaming our Maranda rights.

Both of us have no idea what’s going on, but now the stripper is hysterically crying again. The police officers catch her lying in between sentences when she is giving them a description of tonight’s events. This stripper is so dumb she contradicts herself in every other sentence. The next thing I know my guys come outside of our building to help tell the story and all hell breaks loose. The cops are cracking up asking why we would ever hire a stripper when we’re all sober. The crazy stripper gives us her phone number, date of birth, and fake name, and goes on her way. The police officers pull us to the side, give us a hard look and one of them said “this is why you never order a stripper off yellow pages”. So far I have received 44 calls from crazy stripper mom, and there might be a civil lawsuit involved.

TLDR: Bake your friends a fucking cake for their birthday.

That’s what you get when you order a $200 stripper from the Yellow Pages, I suppose. Worst birthday of all time.