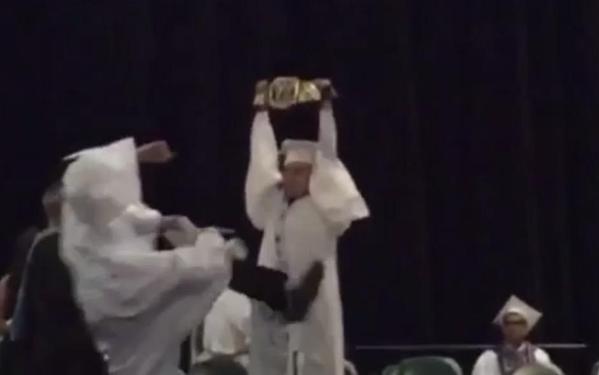 Remember this video we posted the other day?

Turns out students Nicholas Dean and Joseph Castro are paying big time for going viral, because the University of Miami is refusing to give them their diplomas.

“They told us we should be embarrassed and ashamed,” said Dean.

“The administration was ‘very disappointed’ that we had done that,” Castro said.

“It doesn’t look good on them, and I’m sorry about that, but there’s nothing I can do about it now,” Dean said.

Besides the title belt, the students left graduation empty-handed as the school declined to award them their diplomas. The school district said Dean and Castro’s diplomas are being withheld until a meeting with their parents next week. But despite the consequences, it seems the notoriety is making up for it.

A meeting with their parents? Kind of ridiculous that they’re treating them like little kids whose parents need to be spoken to. The boys just graduated FFS. All they did was pull off something different and hilarious to celebrate graduation and now this school look like complete and utter killjoys.

The best part though? The boys don’t regret a thing:

“Totally worth it,” said Castro.

Now we just need someone to pull another Stone Cold special at graduation: