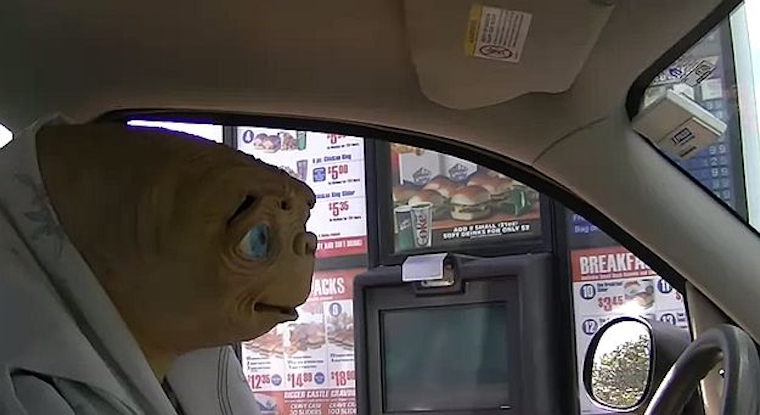 Somebody dressed up as E.T. but then started talking like he was Stone Cold Steve Austin and called himself Stone Cold E.T. Then he went to a drive thru Whitecastle and ordered some cheeseburgers and it was hilarious.

Ok before I get into this, this video is about 4 months old so apologies if you’ve already seen it but I only just came across it and it genuinely had me in hysterics so I figured it was worth sharing it up on Sick Chirpse. Now that’s out of the way let’s get down to business. If you don’t know who Stone Cold Steve Austin is then you’re probably an idiot and you shouldn’t even be on this site. Even if you never watched WWE in the late 90’s/early 00’s then you should have some idea who he is because of all the video games and movies he was in and mainly just because he’s a complete and utter badass. Can I get a hell yeah?

I don’t think it’s as lame if you don’t know who E.T. is because it’s not even that good a movie and the ride at Universal Studios was pants – not sure if it’s still there anymore, I went a long time ago – but I find it a more unrealistic concept because E.T. is on TV all the time and it’s a pretty iconic movie. So I’m gonna assume that everyone knows who Stone Cold Steve Austin and E.T. are when I’m writing this. If you don’t know then do yourself a favour and get educated FFS.

â˜› Check This Out: This Invisible Driver Drive Thru Prank Is Hilarious

It’s possible you might not know what Whitecastle is though, unless you’ve seen Harold and Kumar Get The Munchies which is probably the best advertisement for a fast food restaurant ever as they spend the whole movie trying to get to Whitecastle to eat their burgers. The burgers look pretty good in the movie but they’re kinda gross in real life but once you’ve eaten one you’ve just gotta have another one. I went in Cleveland when I was really high and drunk and my buddy got me 4 and I was like ‘What? 4 burgers? U 4 REAL M8?’ and he was like ‘Trust me’ and he was completely right, I just had to scram down on them. I paid for it the day after when I did the longest, thinnest and brownest shit I have ever done in my life though.

So yeah, now we all know what all three elements are in this story we can understand it fully. It’s basically some guy in an E.T. mask going to Whitecastle to order a couple of cheeseburgers but talking like he’s Stone Cold Steve Austin. Genius huh? I know it doesn’t sound that funny but if you’ve ever watched one of Stone Cold’s stupid wrestling promos than you will absolutely love this because he doesn’t shut up when he’s ordering the cheeseburgers and keeps banging on about the bottom line and hell yeahs etc for the whole two minute video and it really is hilarious.

I think more because of what he’s saying but it certainly doesn’t hurt that he’s got this floppy E.T. mask on and calls himself Stone Cold E.T. throughout the whole promo. I actually Lolled (is that a word?) a good few times during this at some of the crap that he was spouting out of his mouth, I can’t believe the guy filming it wasn’t in hysterics. It’s just such a good idea to combine E.T. and Stone Cold Steve Austin, I can’t believe that nobody had thought of it before! Guy is clearly a genius.

â˜› This Is Good: Girls Wrestling In Coleslaw

â˜› Watch This Next: Wrestling Match Inside A Supermarket