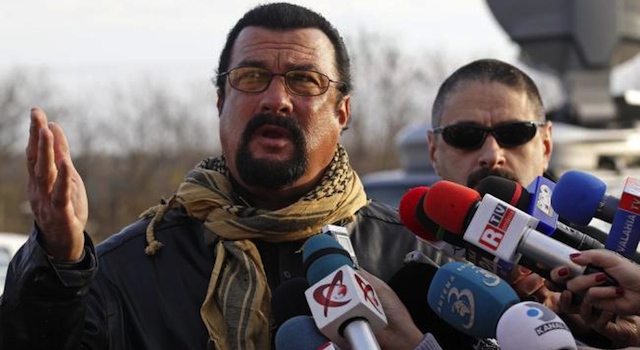 The idea first came to the Under Siege actor when he was shadowing a county sheriff for his TV show (which I’ve never heard of) ‘Steven Seagal – Lawmaker: Maricopa County’. Apparently Maricopa County is a central Arizona county where Steven Seagal teamed up with the local sheriff Joe Arpaio to fight crime. Obviously Steven Seagal is the main man you want by your side if you’re fighting crime, so it sounds like this series will probably be a great success both commercially and practically.

Anyway, as Seagal was cruising the beat, he started to realise how much of a difference he could really make if he sat in that governor’s chair. There’s an interview he performed shortly afterwards where he explains his views on some of the problems facing the United States at this current time, including terrorism and street crime.

However, in a hint at just what would be to come if he did run for governor and somehow managed to get elected on the back of one (possibly two) good movies, he revealed that he thought the number one problem currently facing the United States was its border with Mexico. Of course. That’s just what the southern states need, another racist, overweight, anti-immigration governor, living on past glories and somehow getting away with rocking a completely shit beard. Fantastic, when can we swear him in?

Here’s what he had to say on the issue of America’s greatest threat: ‘Believe it or not I think it’s open borders. People are talking about “oh Islamic terror” but I don’t think it’s that, I think it’s open borders. Any kind of terrorism does (and can) come’. Right. He later qualified this by stating that he doesn’t see colour or ethnicity, only crime: ‘We try to get the bad guy. What that means is, if somebody murders somebody, we go and arrest them. If somebody robs a bank, we go and arrest them’. Sounds fair. And what he definitely really thinks.