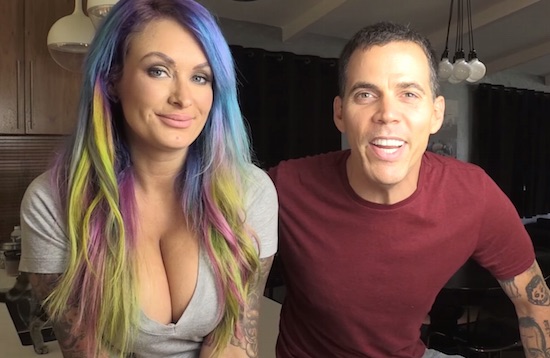 ‘When I saw these boobs I knew this needed to happen.’

Steve-O has always been a pretty immature guy, but I thought now that he was sober and off the gear that he might have left those days behind.

No such luck, as his new video shows him returning to his teenage toilet humour roots. Upon meeting Australian DJ Laura Luxx, Steve-O had one thought:

When I saw these boobs I knew this needed to happen.

Yep, obviously Steve-O sourced a bouncy ball from somewhere and hangs around in his house bouncing it into Laura Luxx’s boob crack via a variety of trick shots. Of course he did:

To be honest although that is kind of sexist it’s also kind of awesome and Laura Luxx lookalike she’s having a fun time too so I can’t really complain about it. You can’t deny that the quality of some of those shots is awesome and Steve-O should probably be pro bouncy ball guy or something, even if he probably did shoot hundreds of takes of each one to get it exactly right. Fair play.

For some more epic trick shots that unfortunately don’t involve boobs, check out the compilation below: