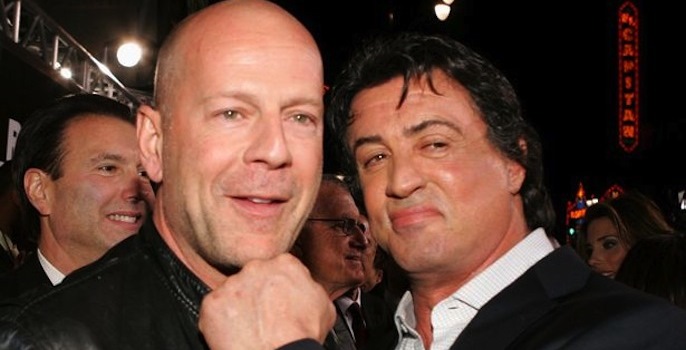 It’s Bruce Willis Vs Sylvester Stallone on Twitter. Who are you backing?

The other day, Sylvester Stallone announced via Twitter that he’d booted Bruce Willis off the Expendables 3 and replaced him with Harrison Ford. He then followed that up with a second, not-so-subtle tweet minutes later, taking a parting shot at his former pal. Here are the successive tweets:

GREEDY AND LAZY …… A SURE FORMULA FOR CAREER FAILURE

Greedy and lazy? Ouch. This Bruce what’s-his-name is done for, that’s for sure. 58-years-old and has already had a career most actors can only dream of but apparently it’s all downhill from here.

â˜› Next: Will Smith And The Actors Who Turned Down Massive Roles

The truth is as great as the Rocky and Rambo films are can Sly look back on his career and say it was better than Bruce Willis’? Die Hard, Pulp Fiction, Sixth Sense, Fifth Element, Unbreakable, Sin City. There’s lots more and plus he’s already been in both previous Expendables films. What great films has Stallone been in other than the Rocky and Rambo franchises?

We’re going with John McClane on this one.