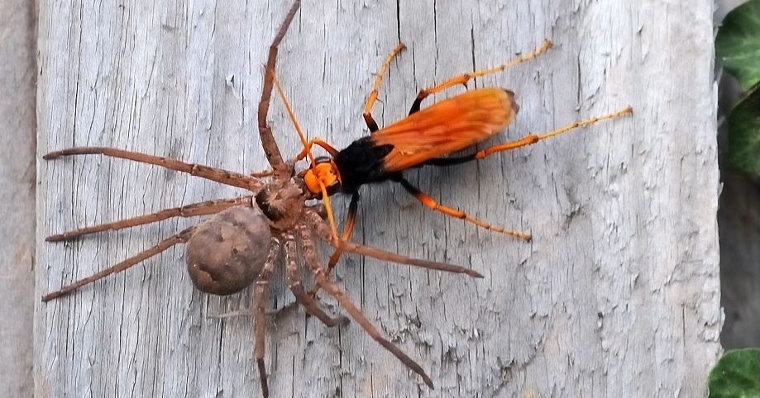 Everyone hates wasps and not many of us like spiders. Turns out they hate each other as well. Here’s a video of a wasp and a spider battling it out to the death.

Wasps are pretty horrible dudes that are hated by the majority of the world’s population and it’s pretty much deserved, init? I mean, why would a creature be so angry all the time? You never see a happy wasp. Even when they’re stinging you and fulfilling their weird little fetish-meter of trying to maim/hurt/kill any animal/human they see, they still have this absolute look of repugnance etched into their pathetic, tiny faces. I guess it’s probably Small Man Syndrome that has made them such horrible bros. It also probably doesn’t help that they’re more than likely the result of a weirded-out gene in their cooler bee cousins and you’d be angry at the world, too, if you were created because of an accident, right? It’s like the condom breaking when your dad was giving your mother one and never being truly loved by either of your parents, or anyone at all for that matter.

A lot of people hate spiders as well but I’ve never really understood why. Spiders are really cool and they just hang around (cool joke, yeah?) in their webs all day, waiting for filthy, shit-ridden flies to buzz into their crystal, intricate web. Any creature that kills flies is an absolute dude in my opinion, because flies are minging and eat their own puke for lolz and are really annoying when they just bzzzzz around you when you’re trying to watch TV or something. I also like the fact that spiders are really horny voyeurs and often pop up in the corner of the bathroom when you’re taking a shower or a bath; it’s a real confidence-booster, knowing that someone actually would take the effort to climb through a window or up through your place’s pipes, just to see you naked. Cool guys. I’ve often been told that people find it freaky that spiders have 8 legs and a shitload of eyes but that doesn’t make them more horrible than wasps, right? Stephen Hawking looks weird, too, but I can imagine he’s a pretty sound guy. He never has trouble chirpsing, anyway.

So, yeah, I’d say spiders and wasps are among the most hated creatures we share our world with along with Luis Suarez and Piers Morgan. A spider hates a wasp and vice versa and they can often be found pounding the shit out of each other in boxing rings all over the world. However, these two have just bumped into each other in the neighbourhood and have obviously got previous beef with each other as they just start to battle to the death, Gladiator style. No swords or shields this time, though, just a sting, wings, eight furry legs and a mouth full of gleaming gnashers.

Keep an eye out for the end – you’ll be having nightmares for a few months – it’s one of the creepiest things you might ever see.

â˜› Watch Next: Wasps VS Flamethrower

â˜› Read Next: The Grossest Picture You Will See Today. Or Probably This Month.