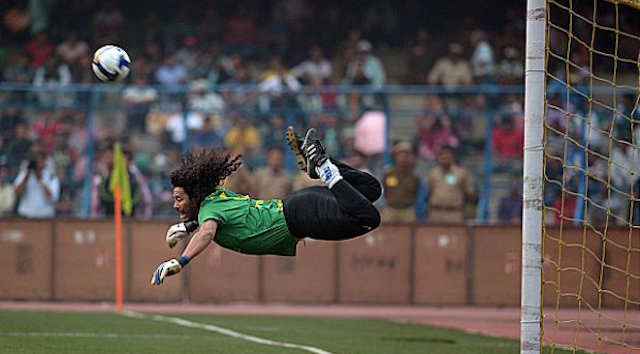 He’s not even the first choice keeper.

Unfortunately it’s not in a big league and so the footage isn’t the best but it’s still a pretty outrageous finish, even if it is pretty close to the goal. It happened in the Spanish fourth division over the weekend when Sarinena were losing to Borja with about 30 seconds to go. Desperate for the equaliser, Sarienna second choice goalkeeper Pedro darted up the pitch for an dangerous looking free kick to the right of the area.

The ball was played in and there was an almighty scramble with Pedro somehow getting the last touch and guiding it into the bottom corner with a modified scorpion kick pretty close to the line. Sure, it was probably a fluke but it isn’t often you see something like that. It definitely isn’t as good as this one which has deservedly claimed the title of the best own goal ever.