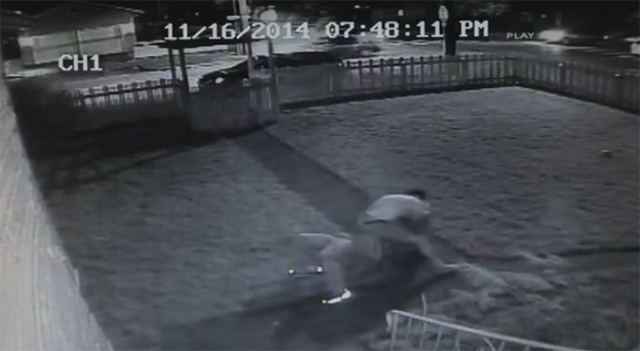 This guy chose the wrong house to burgle.

This guy was in my house earlier this week in the middle of the night on Veteran’s Day. My neighbor saw him and when we checked the security cameras sure enough, there he was. I installed motion sensors and door chimes immediately and sat on edge… it only took 2 days for him to return but this time after finding the bottom door locked, he just made his way around my house to attempt to gain entry upstairs (where my GF and dog are). Once I told him he wasn’t coming in, and wasn’t leaving till he talked to the police he struggled to get away and tried a huge haymaker on the porch and ate an uppercut for his troubles.(off camera) He was just about “out” on the porch but I realized I wanted anything that happened to be on camera so I drug him down the stairs. The rest can be seen on camera…Kudos to the Seattle police as they were here instantly and treated everyone involved with what seemed like “protection” and “service” — not a huge fan of cops but these guys were GREAT! The police report states: “assailant attempted an assault to break free. He lost.

Not sure what the reggae soundtrack is about but we’ll bet Bob Marley would have approved of this beat down too.

Here’s some footage of a thief getting similar comeuppance in Chile.