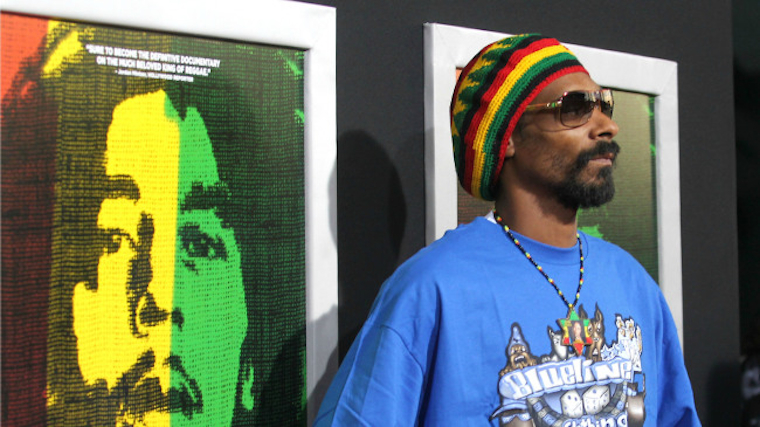 Nobody was sure if Snoop Dogg was serious a few months ago when he announced he was changing his name to Snoop Lion and pursuing a reggae direction, it turns out he was though. Here’s La La La.

Everyone thought Snoop Dogg was going crazy a few months ago when he announced that he was changing his name to Snoop Lion and was going to pursue a reggae direction on his new album, but it looks like he’s sticking with it – at least for the foreseeable future until this album drops – as he’s just dropped the first song to it and guess what? He’s releasing it under the name Snoop Lion and it has a definite reggae feel to it. Major Lazer handled the production so you know Snoop Lion got the best there is out there to try and make a fair crack at it, and the track is fairly decent and catchy to be fair and the kind of thing you can imagine smoking a doob at a session to, it’s just kinda weird seeing/hearing Snoop Lion/Dogg singing and being a rasta  instead of rapping and being all laid back rather than just cruising the hood and fvcking shit up.

The video is even weirder as somehow Snoop has enlisted schlock jockey Eli Roth – you know, the guy who created the Hostel franchise (does two movies count as a franchise?) – to direct it. Obviously he throws a complete curveball and doesn’t do anything similar to his usual horror style and instead it’s a bunch of kids hanging out with Snoop Lion and then kinda acting out a weirdass acid trip or something and the ‘death’ of Snoop Dogg and his subsequent reincarnation as Snoop Lion. It’s weird. There’s flying robots going around, singing peppers, loads of cardboard cut outs of boats and stuff – like the kind you might see in a school play or something – loads of cartoon animals, pineapples smoking weed, giant pandas and all sorts of crazy weird shit going on in it. Probably best that you roll up your own zoot and spark it before checking the video out.