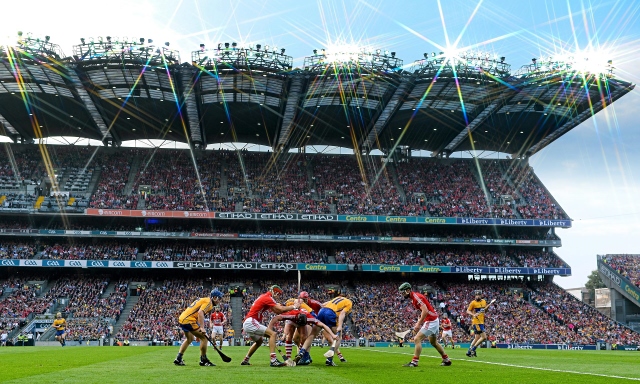 As hurling makes its first appearance on British television, tweeters took to the net to share their thoughts.

Hurling has been a national pass time in Ireland for the best part of a century. However it was barely recognised outside of the country until Sky Sports bought the rights to broadcast the games earlier this year. With its heavy reliance on fast pace, quick reactions and the mentality of being a ruthless bastard with a stick, it truly is a fantastic game to watch.

If you’ve never heard of or seen the game in action, here’s a quick insight into what this barbaric sport looks like:

Taking into account the really shitty trance music throughout that video, it is still pretty impressive don’t you think? Irish viewers are loving the national coverage:

Glad to see hurling shown on sky sports. Fantastically skilled sport but to date hasn’t got the support it deserves…

It’s a great achievement for a minor Irish game to reach the dizzying heights of Sky Sports but somewhat confusing for those outside of Ireland who may have never even heard of the sport.

Naturally, this confusion has been vented on social media:

Trying to watch hurling, pretty random game, run with the ball hit it with a stick nd smash it through some posts with no rules! – Jack Rennison (@jt_101) June 7, 2014

I had never heard of the Irish sport Hurling before but if you want to see it turn on sky sports 3 now. Outrageous scenes! What a sport!! – Toby Lester (@lobytester) June 7, 2014

Liking this Hurling on Sky Sports 3. Not quite sure of the rules but the skill involved is outrageous.

Clearly, it will take some getting used to.