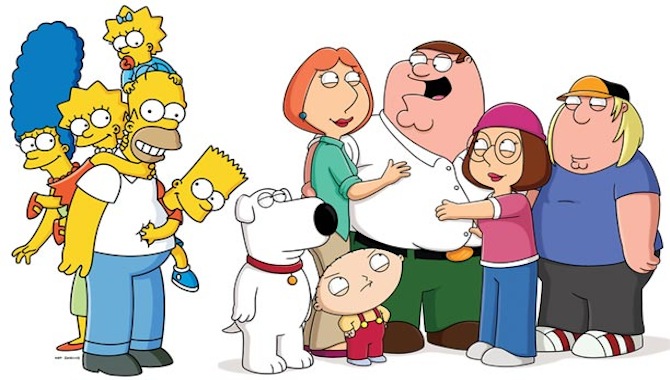 Matt Groening and Seth Macfarlane are bringing their creations together to beat the shit out of any other animation ever.

This is big. This shit is almost as big as when Casualty and Holby City did a crossover. After years of taking sly digs at each other, the two titans of animation are coming together to create what will surely be the most watched Family Guy episode in history. The episode will be called ‘The Simpsons Guy’ (0/10 for imagination there, chaps) and will feature a Griffin family road-trip that takes them to Springfield.

The feud between the two shows has been well documented, with Family Guy creator Seth Macfarlane often facing accusations of plagiarism from The Simpsons writers and critics alike. Even South Park has taken a few shots at the Griffins, notably in their episode ‘Cartoon Wars’, in particular their cutaway and flashback jokes. However, the animated tension has cooled somewhat in the past couple of years, culminating in this collaboration. As the episode will technically be a Family Guy episode, how much of a Simpsons influence will there be? Hopefully it’s a mixture of the best points of both shows, because if all it is is Homer introducing a few cutaways then they’ll have wasted everybody’s time.

This episode has the potential to be great, a landmark moment in the two shows’ respective histories, or it could be utterly shocking, and we’ll never watch either show again and just sit and watch American Dad! whilst crying into endless litres of ice cream. Or something. I’ll probably be doing that even if it’s amazing.