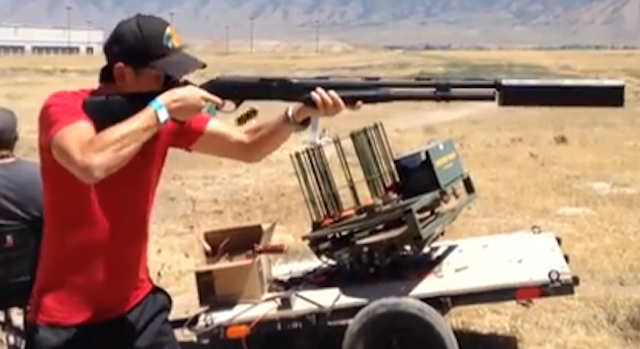 I never dreamed anything like this would ever be possible.

Before we go into this, I’ve got to explain that my knowledge of shotguns purely comes from playing a bunch of video games like Duke Nukem and Half Life and Blood when I was a kid, so I don’t really know what I’m talking about at all, but nevertheless this next video blew my mind. .

It’s fairly simple and short in that it’s just a dude with a shotgun – a Benelli M2 to be precise – unleashing a load of rounds but the fact that he’s attached a SilencerCo “Salvo” 12 gauge suppressor makes it an entirely different experience. Not only can he unleash about 9 rounds in about 3 seconds from the gun – I think that’s just down to the gun but it sure beats having to reload after every round – it also makes almost no noise at all which is completely mind-blowing as the shotgun was always the loudest and most violent weapon known to man. Perfect for blowing people’s heads off.

I don’t know if this is going to revolutionise shotgun use or what, but it does make it an entirely different proposition from what it used to be before. To be honest I’m not sure I even like it as it kind of takes the power and violence away from the weapon, but hey at least we’ve got the option. Just need to teach the nerd in the video to reload as good as this guy now.