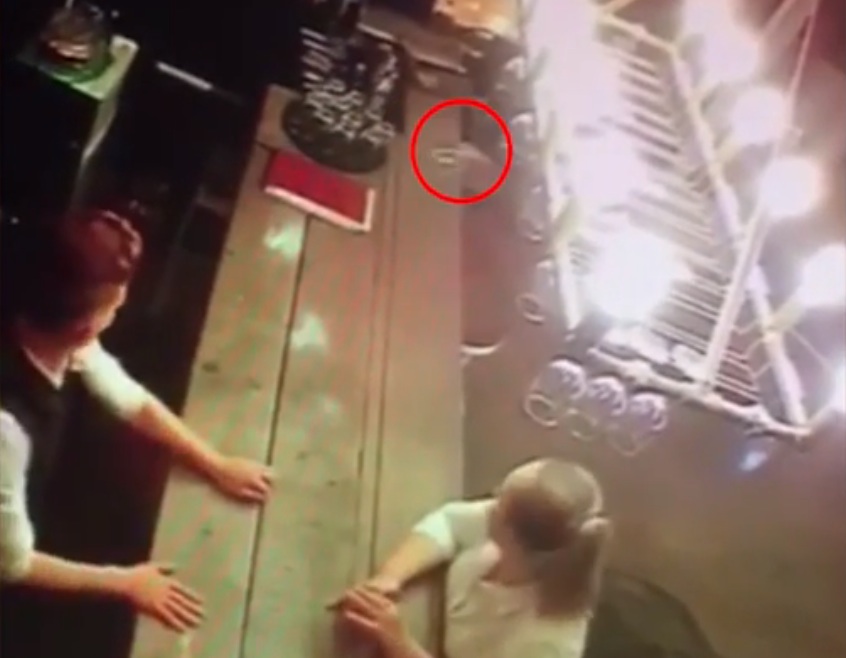 A restaurant owner has released the CCTV footage below, which he claims shows a ghost throwing a glass across the bar.

Shaun Deakin can be seen standing with another member of staff. No one else appears to be near the glasses at the time in the New York Italian Kitchen in West Yorkshire. However, out of nowhere one of them is thrown off the tray and across the bar.

Apparently this isn’t the first supernatural thing to have happened in the restaurant. Deakin said that:

Ever since we did the fit out, there’s been a few unusual things going on, all in one area.

There’s champagne glasses in the bar and one day, six of them just came flying out.

We kind of ignored it but then there was another incident when a member of staff was walking with a tray of glasses.

He said he felt like someone smashed the tray from underneath and the glasses went everywhere.

We have radios that we use between the front of house and kitchen, with screw dials on top. One day, a staff member went to pick the radio up and the screw at the top was missing.

As they were looking for it, it was pushed out in front of them.

The footage we caught on Saturday was the first time we have got anything on camera.

A glass slipped from the middle of the tray and rotated in the air before landing on the edge of the bar.

It should really have just rolled off the side and smashed but it didn’t. It stopped and seemed to be pushed back again.

I personally am quite sceptical of things like this but there’s no explanation.

It’s a bit creepy and some of the staff have been quite scared.

Freaky shit. Since putting the footage out on Facebook, Deakin has been approached by a paranormal group who are planning on searching the site for signs of spirits this week. Fingers crossed they get to the bottom of it.

For more spooky shit, check out this ghost picture that was so vivid, Facebook gave the option to tag it as a person.