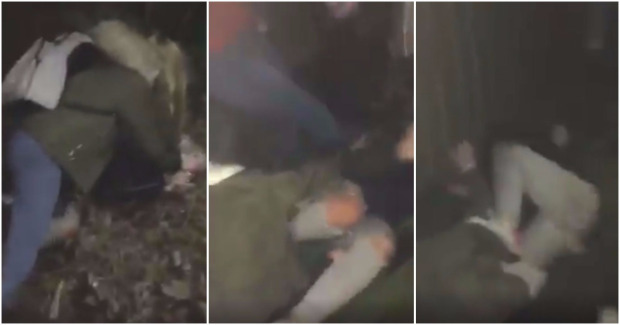 Everyone just stood and filmed her rather than getting involved.

It’s a major criticism of youngsters today that they would rather sit around recording stuff on their phone and taking photographs of it rather than living their own lives, and it turns like this criticism can be extended even to when someone is getting savagely beaten up in front of them.

That’s mainly thanks to the video below which shows a 12 year old girl getting the crap kicked out of her in Livingston, West Lothian on Friday. Her injuries were so bad that she was left needing hospital treatment and when you watch the video it really is distressing how so many people – both male and female – kick her in the head whilst she’s down on the floor with others pinning her down.

Check out the video below, but again be warned because it’s pretty messed up:

Brutal. The girl’s aunt, who can’t be named for legal reasons, said the following:

She was kicked in the head multiple times whilst on the ground by at least four of them.

Lads also joined in kicking and punching this small girl. It was a vicious mob mentality and she could have died. Absolute animals.

She is currently in A&E. It was unacceptable and disgusting behaviour.

I mean it is a pretty horrific video but I’m not sure if I was 12 years old I would have the guts or be tough enough to step up and interfere against a gang like that. In that respect, it’s probably better that whoever filmed it took a video so that police can identify those involved and punish them accordingly.

I know that doesn’t help the girl who was beaten up, but I guess it’s better than nothing and might stop it from happening again. In case you’re worried about her, she has been discharged from hospital and posted that she was ‘fine’ on social media so should OK. Let’s hope these assholes get put down though.

For more of the same, check out this guy get initiated into a gang by getting beat up by his best friends. Makes sense.