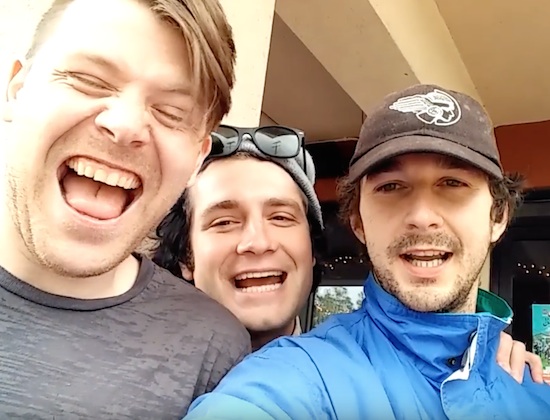 Once you’ve found him, you can do anything you want with him.

As part of his continuing legacy of wacky performance art, Shia LaBeouf is putting his exact GPS co-ordinates on this Twitter account and inviting anyone in the world to come and find him. Once you’ve got him, you’ll be ale to do whatever you want with him as part of the #takemeanywhere campaign.

Here’s a video of the first people who managed to track him down:

Wow. I’m sure Shia LaBeouf enjoyed hanging out with three kids who can’t even talk or make sense because they’re so baked and buying them lunch. Bet that cost a bit, what with the munchies and all.

Also isn’t really that inspired to go to lunch with him when you could literally do anything with him. They don’t really seem like the kind of guys who thought their plan through though. It was probably just ‘get high and get food with him’ as that’s all they ever do in the regular monotony of their lives.

In fairness though it is a pretty cool idea and Shia must have been prepared to hang out with people like that because honestly who has the time to just drop whatever they’re doing and come and find him. Probably only students who are sitting around getting baked and think that it might actually be a good idea to do that. Or the unemployed. Or complete losers who are obsessed with Shia LaBoeuf.

Hmm – have fun for the next 30 days, Shia. Sure you’re going to meet a whole bunch of characters.

For more of his wacky performance art, click here.